(Photos at end of story)

Ashland, WI, July 17 – On a near-perfect summer evening in northern Wisconsin, Mike Anderson and Jesse Aho scored feature wins at the ABC Raceway for the first time in several years, while eight more inductees were added to the track’s Hall of Fame, in a program presented by Zar’s Bar & Banquet Hall of Ashland on Saturday.

In the other features, Steve Stuart, Dale Coddington and DeJay Jarecki continued their winning ways, and Jared Akervik bagged his first win here since the Raceway’s May 29 opener.

Anderson, of Jim Falls, took full advantage of his pole-position start in the WISSOTA Modified headliner and led every circuit, as the 20-lapper was interrupted only once by a yellow flag. Positions were swapped frequently behind Anderson, however, as first Brandon Copp, then Alex Van Natta, and finally Pat Cook filled the runner-up role over the first five laps.

Copp fell back unexpectedly into the second five early on but worked his way past Cook for second again on lap 6, with Van Natta in tow, only to lose the ground he had gained with a spin on lap 7 to bring about the race’s only stop. On the restart Van Natta pushed up the track in turn 4, allowing Cook to retake second, with Cole Spacek following into third.

Anderson’s lead was insurmountable, winning by nearly a full straightway for his first victory here since August 2017. Spacek stole second from Cook in the closing laps to solidify his points lead, and Van Natta held down fourth well ahead of Jake Hiatt.

Aho grabbed the lead midway through the caution-filled WISSOTA Midwest Modified main event and held on for his first win at ABC since August 2018. The veteran racer from Toivola MI started on the inside of row 3 and was a constant threat to early leader Paul Suzik by sticking to the low groove while Suzik ran around the track’s perimeter, creating a great battle for the lead that was spoiled by nine caution slowdowns.

Brian Lund’s spin on lap 5 started the “yellow fever,” as it took five more attempts to reach the halfway point from there. After Mitch Kieber’s loop on lap 7, Lund was spun on the restart. Then first-nighter Jesse Raffaelli’s stalled ride was followed by another Lund spin, but on that re-do Aho made an inside move on Suzik work to take the lead, with Vernon following into second. A two-car get-together on lap 9 slowed things up again, and on that restart Tanner Hicks and Jack Rivord appeared in the top five just before another two-car mess occurred.

After Rivord stole fourth by driving around Hicks on lap 10, Raffaelli’s car failed him again a lap later. Aho led another four laps before the final yellow – this one for a spin by rookie Neil Dees – forced a green-white-checkered finish as the race’s time limit was exceeded. Aho again withstood the pressures for a hard-earned win, while Vernon strengthened his grip on the points lead as runner-up, with Suzik, Rivord and Hicks close behind.

Stuart is now four-for-four in feature action since breaking out his new WISSOTA Super Stock just over a month ago, and the win on this night gave the six-time track champion from Ashland the 39th of his career, moving him into 10th place alone on the ABC Raceway’s all-time feature win list.

In a 15-lap run that was stopped only once, Stuart started fifth on a seven-car feature grid and didn’t wait long for an opportunity to present itself, slipping past Aaron Mashlan for fourth on the initial drop of the green, then using lower-lane passes of Cory Casari on lap 2 and Justin Weinberger on lap 3 to move into second. Stuart then reeled in Matt Deragon, who had led from the start, and moved up to the outer groove of the smooth, slick red-clay surface to edge ahead on lap 8, just before Weinberger’s spin presented the lone break in the pace.

As Stuart led the way again after the restart, Shawn McFadden shot through an opening on the low line, while Weinberger took the upper lane, and the pair completed a three-wide pass for second and third. Deragon managed to reclaim third with three laps to go, and McFadden was closing the gap on the leader in the final lap, but Stuart held on for the win. Casari recovered from the back-of-the-pack penalty for the lap 8 caution to earn fourth, just ahead of Weinberger.

This week’s ABC Six-Cylinders’ feature was a non-stop affair, with second-row-starting Dale Coddington working hard to get by early leader Jake Nevala by lap 3. But from there, the three-time track champion from Hayward was uncatchable in capturing his second straight win and the 27th of his career at ABC.

Before the midpoint of the 15-lapper, divisional points leader Tiffany Hudack, who started eighth on the 12-car grid, began a charge to the front, working her way around Dalton Truchon for third on lap 6 and copying the move to snag second from Nevala later in the same circuit. But unlike in previous weeks, Hudack could not close the distance on Coddington, who pulled away to a half-straightaway margin of victory. Truchon, Nevala and Mathew Rohlfing completed a well-spaced top five.

Jarecki’s feature win streak in the WISSOTA Hornets was extended to a track-best six after running away from Derek Dunbar in the two-car, five-lap A-main. Jarecki, of Ashland, outran Dunbar to the corner and simply drove away to a winning margin that was not much less than a straightaway.

It looked for a while as if Dylan Shelton’s return to the ABC Raceway was going to be a huge success, as he started the WISSOTA Pure Stock feature on the pole and led the first couple of laps. But Akervik, of Superior, dove inside on Shelton on lap 2 and took the lead, just before RJ Holly and Aaron Bernick got together to bring about the eight-lap race’s only caution flag.

For the remaining laps Akervik fended off Shelton’s every threat, with Cory Jorgensen just a couple of car-lengths back, waiting for an opening. Akervik protected the bottom groove and scored his second feature win on the season, with Shelton right on his back bumper at the checkers. Jorgensen was not far back, while Holly held off Bernick for fourth.

During the program’s intermission, the ABC Raceway introduced its Hall of Fame Class of 2021, which included the late Bill and Lydia Carroll and their daughter Sue Mashlan, and former announcer Gary LaPean, in the Contributors category, and the family of the late Zeke and Lois Johnson in the Volunteers category. Inducted in the Drivers category were Steve “Budman” Anderson, Tim Carbon, Jon Lumberg, Bob “Polecat” Peltonen, and the Weber family of racers.

Also receiving his recognition as a member of the Class of 2019 was retired racer Dean Yrjanainen, who was unable to attend the ceremonies that year.

On Saturday, July 24, the ABC Raceway will host its annual fundraiser night for the local chapter of the American Cancer Society as well as the Chequamegon Bay area’s The Brick Ministries food shelf with its “Racing for a Reason” night, to be presented by Northern Clearing Inc of Ashland. Joining the WISSOTA Modifieds, Midwest Mods, Pure Stocks and Hornets and the ABC Sixes will be the Northern Renegades traditional sprint cars, and all fans who come to enjoy the show in the main grandstands will be admitted free of charge.

During the night there will be a number of ongoing fundraising activities to help raise money for these two very special causes.

The grandstand gates and pits will open at 5 pm, hot laps at will start at 6:15, and the first green flag of the night is scheduled to fly at 7 pm. WSBZ, 93.3 FM, will air updates from 4:30-6 pm on Saturday, with simulcasts online via the station’s website, www.wbszfm.com. 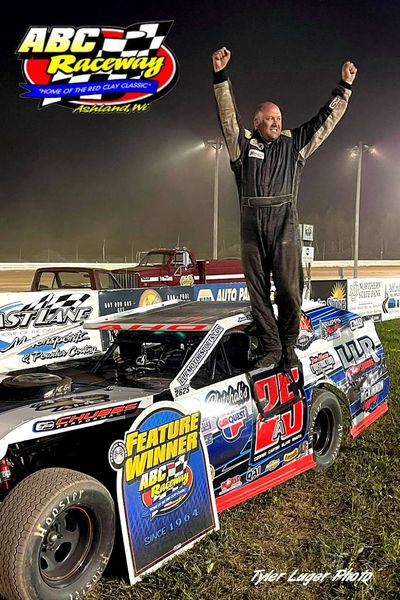 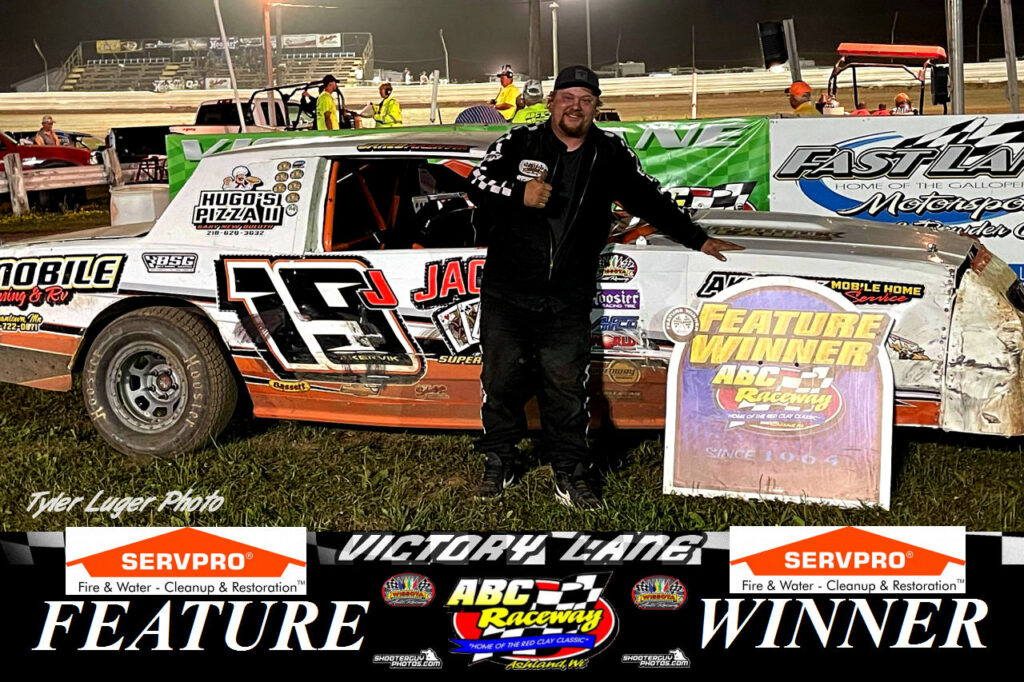 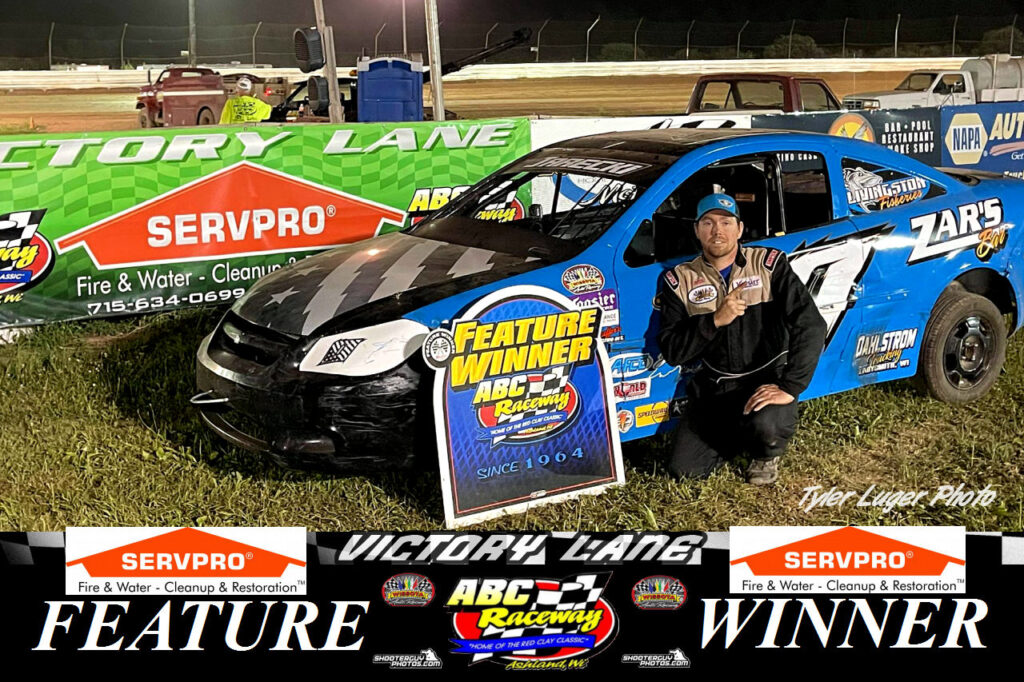 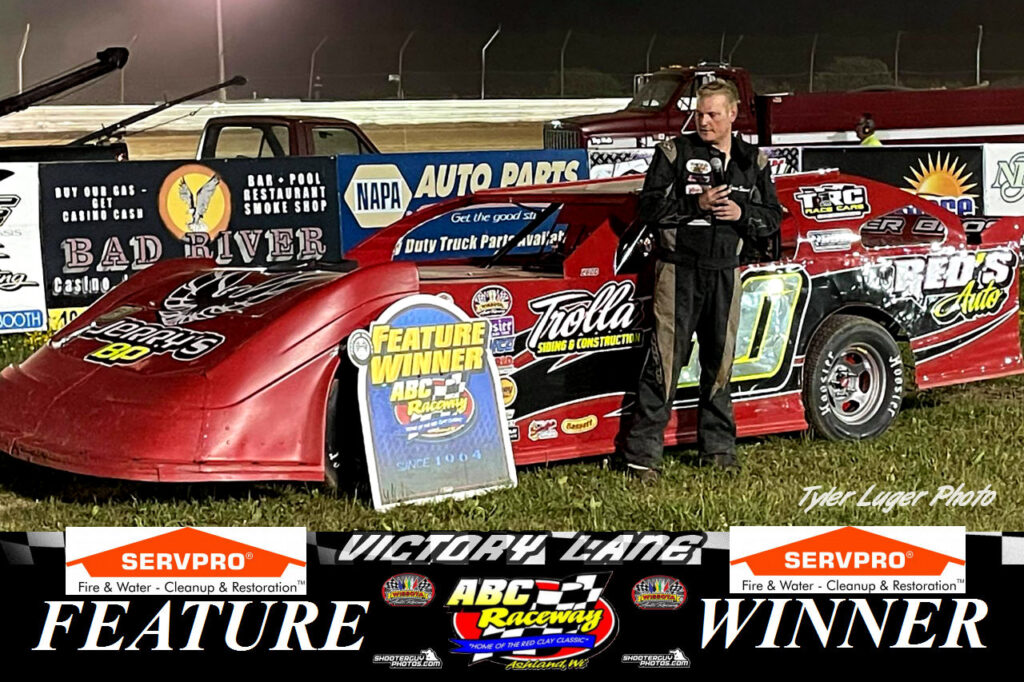 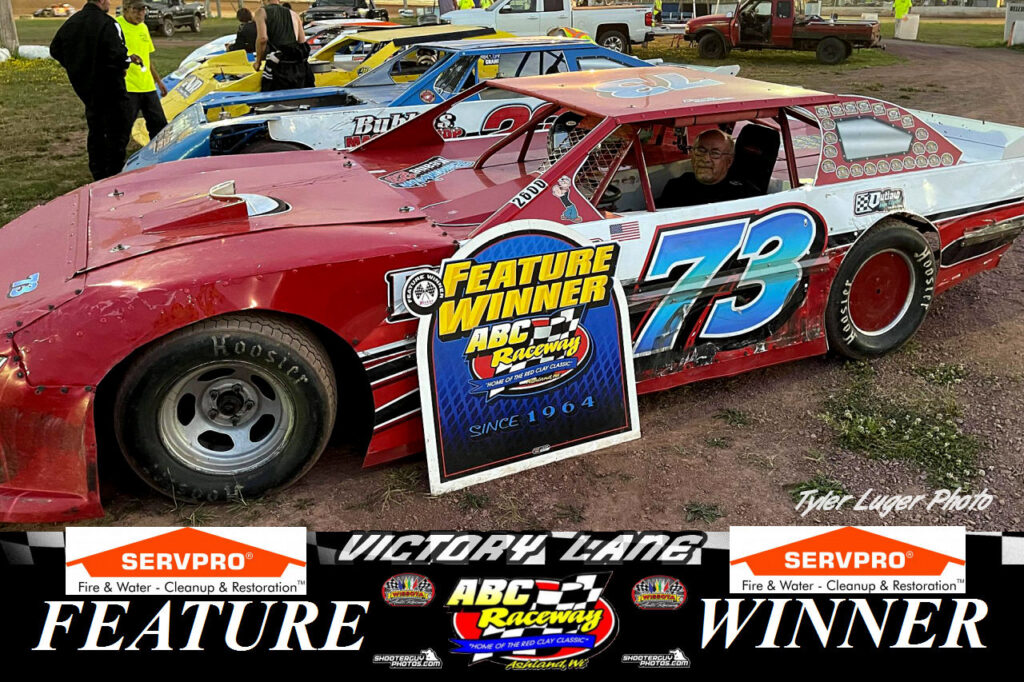 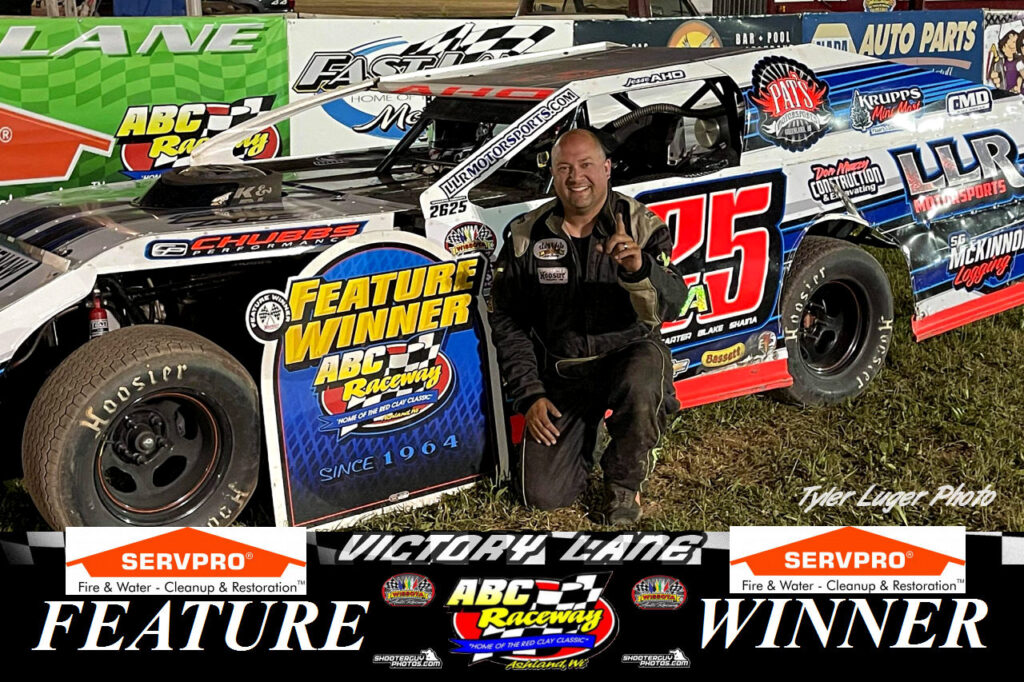