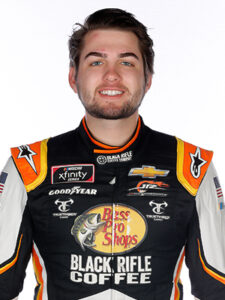 NASCAR Xfinity Series star Noah Gragson, who drives for Dale Earnhardt Jr, will be at the ABC Raceway in Ashland on Saturday, July 24, with his JR Racing Beard Oil Distributing-sponsored car to sign autographs as part of the track’s “Racing for a Reason” program. (NASCAR file photo)

Ashland, WI, July 22 – Of all the special nights of stock car racing at the ABC Raceway on the 2021 season schedule, few aim to be more so than the program planned for this coming Saturday, when Northern Clearing Inc of Ashland will present its annual “Racing for a Reason” fundraiser event.

The program will feature the second visit of the season to the northern Wisconsin speedplant by the Northern Renegades traditional sprint car series, along with five of the Raceway’s six regular weekly divisions in action.

The event is geared as a fundraiser for two very special causes – the American Cancer Society, and The Brick Ministries local food shelf. In addition to the action on track, there will be several events, raffles, and other ways for fans to contribute to these two great causes going on throughout the evening at the track. Including button sales with proceeds’ going to the local cancer center.

“We are so proud to be associated with the Vernon family and Northern Clearing when it comes to this night,” Raceway president Eric Erickson stated earlier this week. “This is an incredible opportunity for the racing family to contribute to two important causes in the Chequamegon Bay area, and the generosity of Northern Clearing helps make this possible.”

In addition, NASCAR Xfinity Series star Noah Gragson, who drives for Dale Earnhardt Jr, will be on hand with his JR Racing Beard Oil Distributing-sponsored car to sign autographs.

Add to that the fact that the ABC Raceway is offering free admission to all fans who wish to watch the show from the main grandstands, and you have the makings of what will be a memorable night of fun and action for the whole family.

Chris Lewis of Grand Rapids, MN, held off multiple challenges to win a thrilling Renegades traditional (or wingless) sprint car feature during the series’ June 26 visit to ABC. All of the 15 Renegades racers that were here on that night, plus perhaps several others, have voiced their intent to travel from Minnesota’s Iron Range to compete on the three-eighths-mile Ashland oval.

“The drivers in our series have been talking about getting back to the ABC Raceway since we were there last month,” said Renegades tour director Randy Murray recently, in reference to the tour’s June 26 visit to the award-winning red-clay oval. “They had a great time and put on a heck of a show for the fans, and it should be even better this time around.”

There will be no admission price to get into the main grandstand for this special show, and fans are encouraged to arrive early for the festivities. The grandstands will open at 4:30 pm, hot laps start at 6:15, and the first green flag of the night is scheduled for 7 pm. WSBZ, 93.3 FM, will air live updates from 4-6 pm on Saturday, with simulcasts aired online via the station’s website, www.wbszfm.com.

The ABC Raceway is located 3-1/2 miles south of Ashland on State Highway 13 and one mile west on Butterworth Road. For raceday information call (715) 682-4990

On Saturday, July 24, the ABC Raceway will host its annual fundraiser night for the local chapter of the American Cancer Society as well as the Chequamegon Bay area’s The Brick Ministries food shelf with its “Racing for a Reason” night, to be presented by Northern Clearing Inc of Ashland. Joining the WISSOTA Modifieds, Midwest Mods, Pure Stocks and Hornets and the ABC Sixes will be the Northern Renegades traditional sprint cars, and all fans who come to enjoy the show in the main grandstands will be admitted free of charge.

During the night there will be a number of ongoing fundraising activities to help raise money for these two very special causes.

The grandstand gates and pits will open at 5 pm, hot laps at will start at 6:15, and the first green flag of the night is scheduled to fly at 7 pm. WSBZ, 93.3 FM, will air updates from 4:30-6 pm on Saturday, with simulcasts online via the station’s website, www.wbszfm.com.