Ashland, WI, July 18 – During intermission of its race program on Saturday night, the Ashland-Bayfield County Racing Association formally inducted its latest members of its ABC Raceway Hall of Fame in a ceremony on the front straightaway in front of the fans in attendance.

Inductees were selected in one of three different categories: Contributors (chosen specifically by the Hall of Fame Selection Committee for their contributions to the ABC Raceway), Drivers (chosen from those retired from active competition for minimum of five years and recognized for outstanding accomplishments, their loyalty to the Raceway as competitors, and their efforts as ambassadors to area stock car racing), and Volunteers (chosen from those who have provided a minimum of ten years of service to the Raceway and recognized for their significant positive contributions and dedication to the success of the Raceway).

In the Contributors category, the Raceway honored Bill & Lydia Carroll (posthumously) and their daughter, Sue Mashlan, long-time former owners of the Airport Inn, a popular tavern located near the Raceway. It was a favored stop after the races for generations of racers and fans, and the owners were genuine race fans who welcomed the racing community, proudly posting the weekly points standings and their treasured driver photos on the tavern walls and presenting bottles of champaign to feature winners after every race night. The Carrolls also sponsored at least one racer in every division every year during their ownership of the “Port.” ABC Raceway Board treasurer Cheryl Klobucher accepted the honor on behalf of the Carrols and Mrs Mashlan.

Also honored in the Contributor category was Gary LaPean, one of the ABC Raceway’s earliest announcers, who was noted for adding genuine excitement and an infectious enthusiasm to his calls. Gary’s patented call of “Here they come – and there they go!” was very popular with fans during his six years as the voice of the Raceway during the 1970s, and later, as owner of the local radio station, he also aired live broadcasts of the races for a few summers, helping to further promote the track.

In the Drivers category, Steve Anderson of Ironwood, MI, known as “Budman” to his friends, fans and fellow drivers, was honored for his 33 years of competing in the Six-Cylinders, WISSOTA Street Stocks, WISSOTA Midwest Modifieds and WISSOTA Super Stocks. He enjoyed particular success in the Street Stocks, where he won ten of his 12 career features and finished second in points three straight seasons, 2005-’07. He drew many fans from Michigan’s western Upper Peninsula, who loyally followed him to Ashland to cheer for him.

Tim Carbon was a popular driver from nearby Highbridge who toiled in entry-level divisions here for 26 years as a loyal competitor, racing on the very definition of a shoestring budget. Carbon began his racing career in Hobby Stocks in 1990 and finished eighth in points in 1992 and ’93, then moved into the WISSOTA Street Stocks, finishing top-ten in points in ten straight of his 12 years there. Racing in the WISSOTA Pure Stocks from 2006-’16, he tallied all 13 of his career feature wins, and he tied for one points title in 2009 and earned one outright in 2011.

Jon Lumberg of Ashland began his career in the Hobby Stocks and won points championships there in 1990 and ‘91 while collecting four feature wins. He then moved into the WISSOTA Super Stocks in 1992 and became a top-flight contender every week for the next eight seasons, collecting five more feature wins, finishing top-10 in points every season, and winning another points championship in 1996. For a brief time during his on-track career, Jon also served on the Raceway Board. Being a huge Dale Earnhardt Sr fan, he ran black cars carrying the “Intimidator’s” familiar number 3.

Bob Peltonen, formerly of Ashland, began his racing career in the mid-1950s and eventually became one of the more successful competitors at the ABC Raceway, winning an impressive 11 career features from 1967 to ’69, mostly in the Late Model Modifieds class. Bob, who was nicknamed “Polecat,” also has the honor of being awarded the first trophy ever presented to a feature winner at the track, dating back to sometime during the late ‘60s. During his successful run, he raced a car built from a mid-‘60s Corvette, using an image of a lady’s pair of legs in fishnet stockings to create the number 77 on the doors. Not only was Bob a popular driver, but he and his brothers Jim and Bill were also very active and instrumental in the success of this track during its formative years.

The Weber family of Bayfield also became popular racers during the earliest years of the ABC Raceway. Brothers Arden and Bill were eventually joined by their father Bud, known for racing in the Hobby Stock and Street Stock classes from the late ‘60s into the mid ‘70s using early 1960s Chevys sporting numbers that started with zero, such as 02, 03, 08, etc, and all sponsored by their popular and successful family apple orchard business. As one of the earliest “multi-car teams,” they would arrive at the track with a car-transport trailer and used a logging pulp truck to pick up the cars to unload them from and load them back onto the trailer. Bud won the Hobby Stock points title in 1971. Younger son Don, or “Ducky” as he was called, later competed in the Sixes, and several other members of the extended Weber family raced here, including Rob, who won the 2007 WISSOTA Street Stock title, and Russ, who raced in the Sixes. The family also was very active in the organization, serving at various times on its Board, including Bud’s time as Vice-President.

Dean Yrjanainen was actually inducted as part of the Class of 2019 but was unable to attend that year’s ceremony, so he was included in this presentation. His 70 total feature wins is second on the ABC Raceway’s all-time victory list; his 54 feature wins in the WISSOTA Modifieds leads all drivers in that division; and he had a run of at least one feature win at Ashland every year for 20 straight seasons, from 1991 to 2010 – the longest such streak in Raceway history. In addition, Dean won the first three ABC Raceway Six-Cylinder point titles, in 1983- ’85; and he earned three more championships in the Mods, in 1997, 2000, and ‘07. He also won three Red Clay Classic titles in the Mods, in 1991, ’93 and ’96, as well as several other notable major races throughout the region. His racing style and success made the “the Flyin’ Finn from Lake Nebagamon” and his number 84 a fan favorite.

In the Volunteers category, the Raceway honored Zeke & Lois Johnson (posthumously) and their family, including their children AJ, Douglas and Maleia. Zeke was involved in the group that eventually opened the ABC Raceway at its present site in the 1960s, and he served for six years on its Board. Lois ran the concession stand for many years and also worked as a ticket-taker. Zeke and Lois were presented with the “Outstanding Service Award” by the Raceway in 1981. AJ got involved at the track in 1970 and has worked on many significant facility and promotional projects here over the years, and he served on the Raceway Board, including terms as the club’s President and Vice-President. AJ also began racing in 1972 and competed here for 13 years before becoming a successful race car owner. Doug also served in a number of capacities at the track and competed in the Bomber class, and Maleia earned the title of Raceway Queen in 1975 and ’76 by selling tickets to the races. Maleia’s sons Ross Fuhrman and Ray Fuhrman Jr have also contributed to the organization, with Ray Jr serving on the Board and Ross being a loyal weekly competitor in the WISSOTA Midwest Mods. Ross’ business, Outlaw Wraps & Apparel, has been a long-time track sponsor. During the ceremony, the Johnson children lofted a luminary in honor of their parents.

Each inductee received a plaque commemorating their addition to the Hall of Fame. A buffet meal was served at Zar’s Bar & Banquet Hall just west of Ashland late Saturday afternoon for the inductees and their guests, as well as for past inductees, giving those on hand the chance to visit, reunite and share stories. 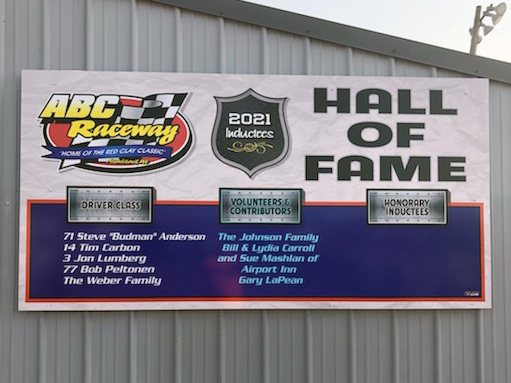 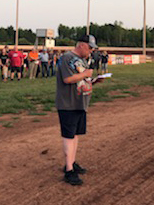 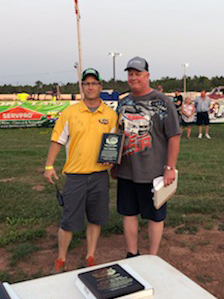 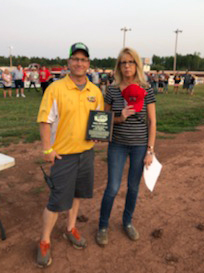 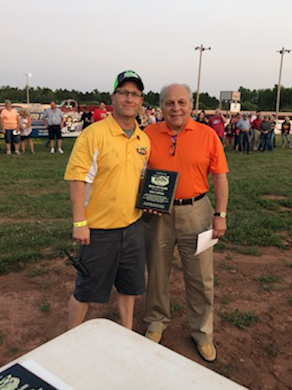 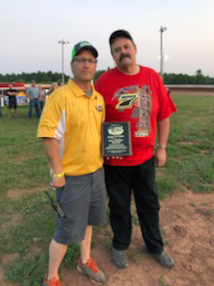 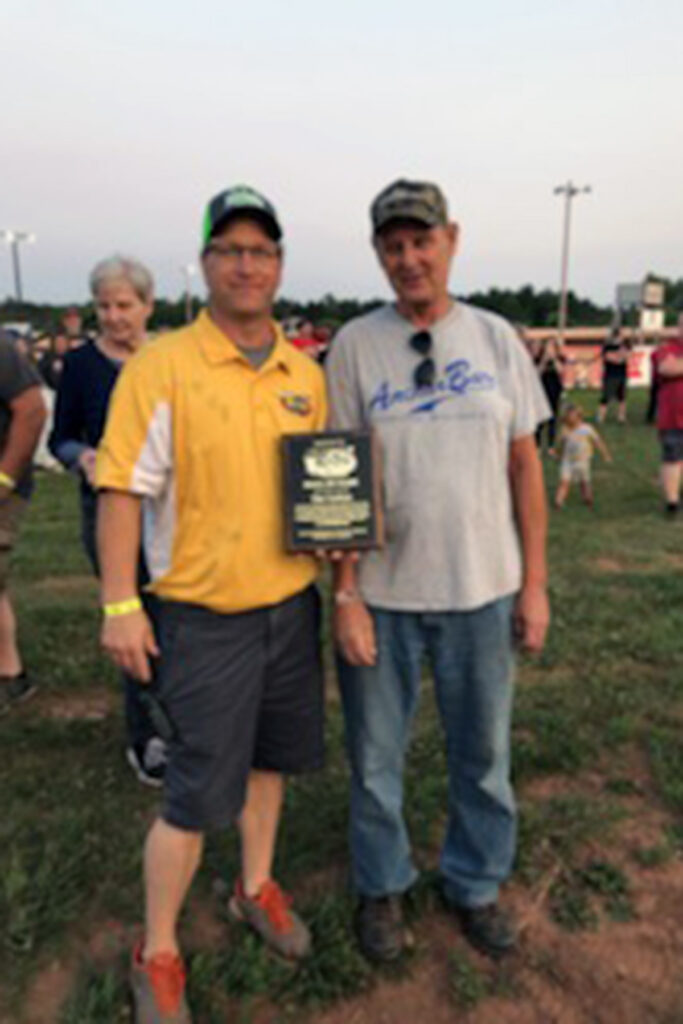 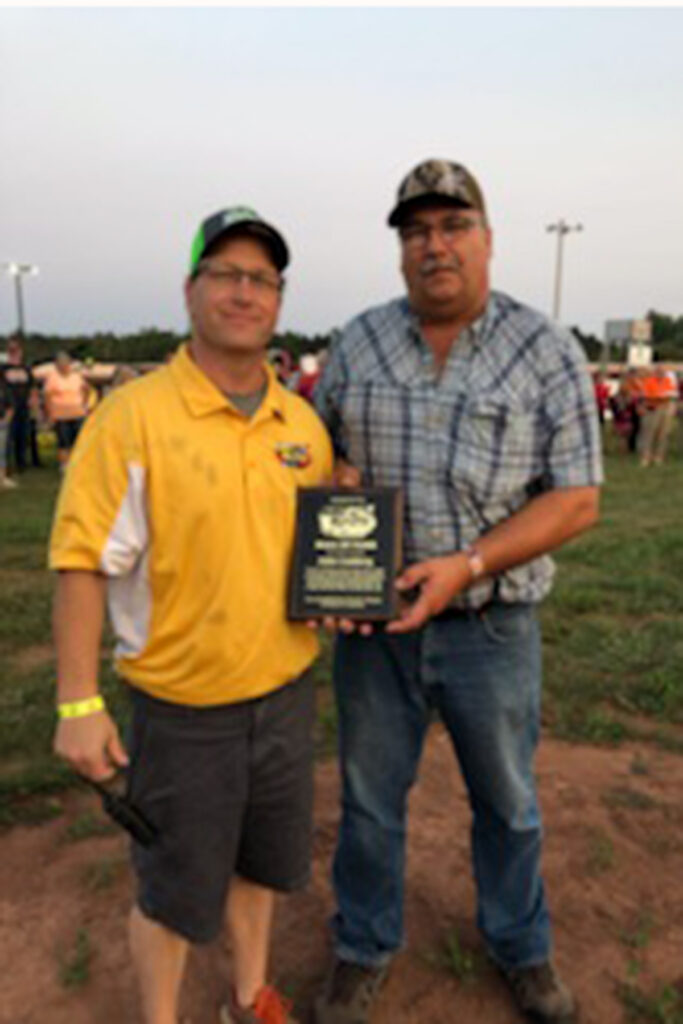 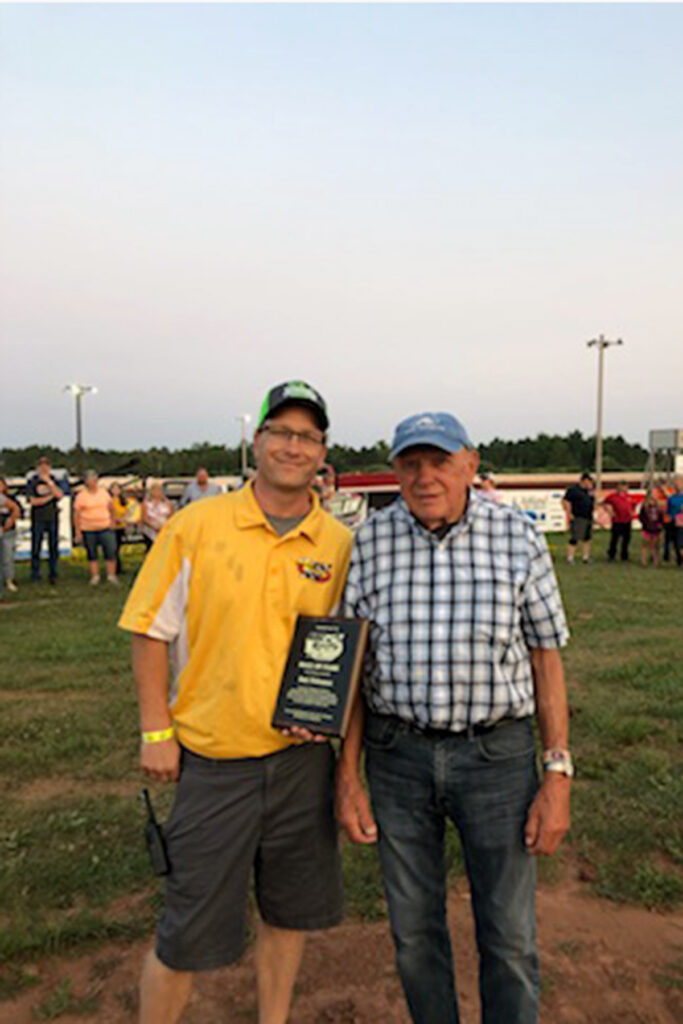 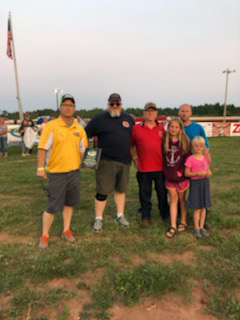 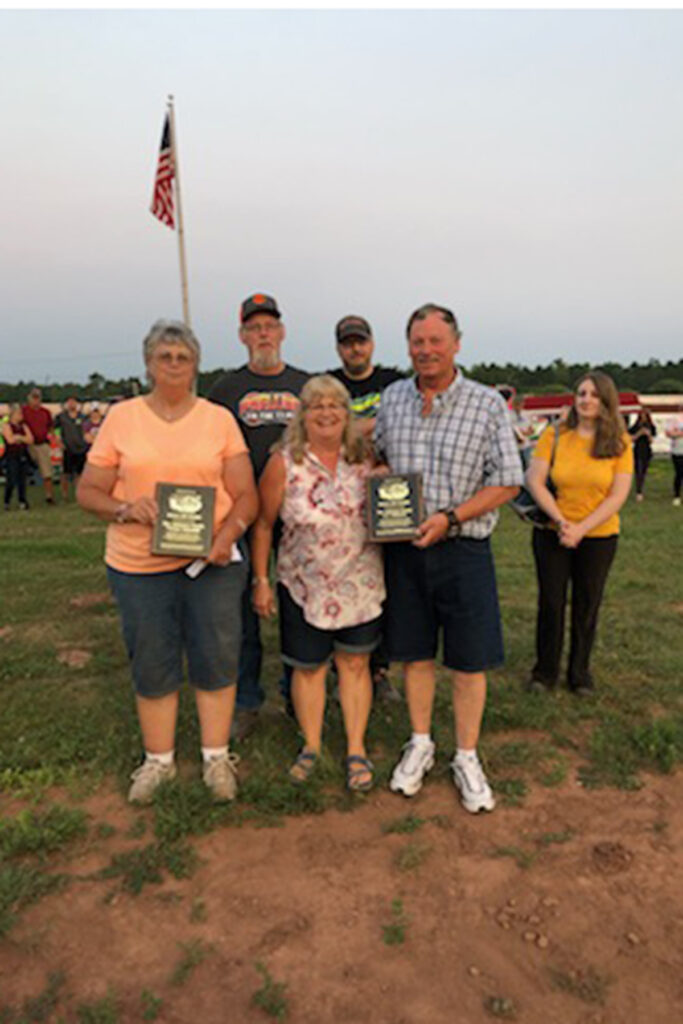 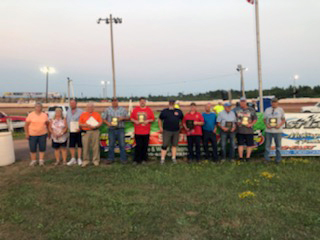 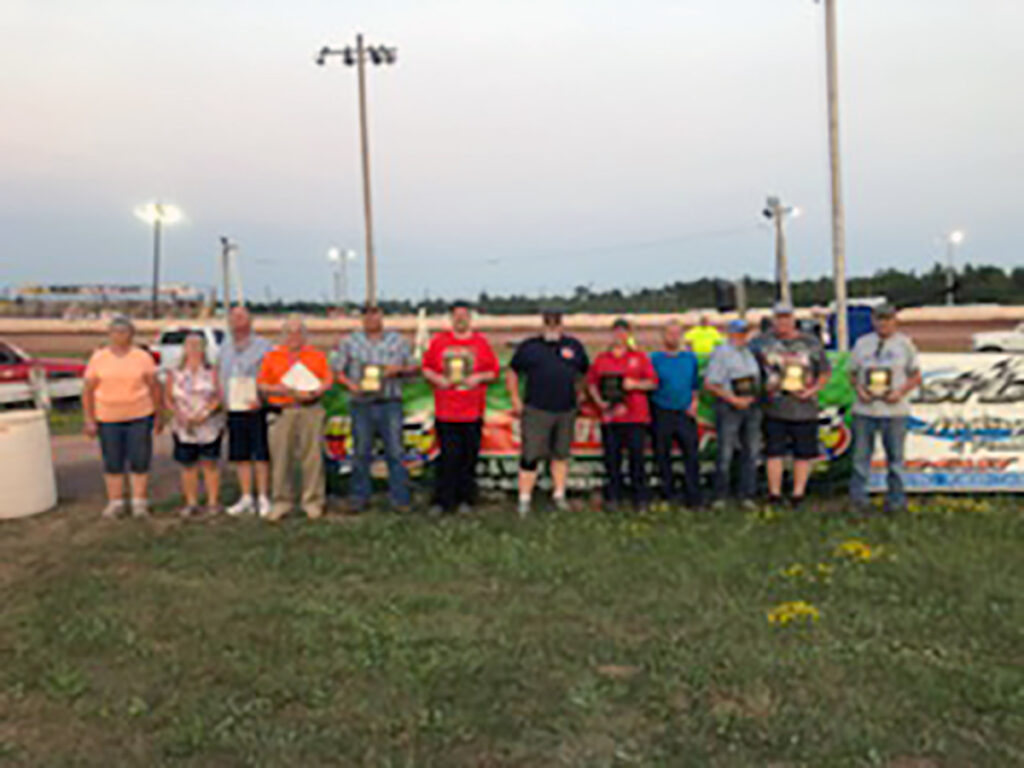