Ashland, WI, August 15 — Caley Emerson of Grand Rapids, MN, swept around leader Jake Kouba with two laps to go and gained a measure of justice in taking the feature win during the second visit of the season for the Northern Renegades’ traditional sprint cars to the ABC Raceway on Saturday night.

During the Northern Renegades’ first visit to Ashland back in late June, Emerson was leading their feature until a restart after a lap 8 caution, when his car refused to go and he steered into the infield and out of the event. So Saturday’s win had a very sweet taste to it.

The 13-car starting grid ran off its 20-lap A-main non-stop, with Jake Kouba challenging polestarter Jimmy Kouba right away. It took two laps before Jimmy clearly established himself at the point, with Emerson, who started outside on the front row, holding third ahead of Lance Solem and Chris Lewis.

The Kouba boys pulled away to duke it out as the race reached its midpoint quickly, with Josh Braford displacing Lewis for fourth. A couple of laps later Jake Kouba used an inside move to take the lead away from Jimmy, as Emerson closed the gap considerably.

With six laps remaining Emerson slipped by Jimmy Kouba to take over second, while Nick DaRonco used the very upper edge of the racing groove to sweep by Braford for fourth. Coming off of turn 2 with two laps left, Emerson completed an outside pass of Jake Kouba and held on for a three-quarter-second margin of victory.

Jimmy Kouba, DaRonco and Braford completed the top five. Jimmy Kouba set a new track single-lap record for the Northern Renegades during the early stages of the run with a time of 16.928 seconds (79.750 mph). 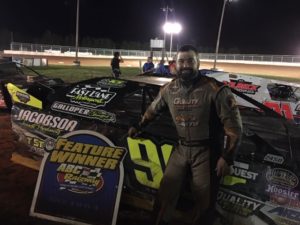 Neil Balduc and Pat Cook put on a show for the large crowd in attendance in the 20-lap WISSOTA Modified feature, with Balduc, the 2016 track champ from Bessemer, MI, nipping Cook at the line for his second win of the season.

Polestarter Tanner Byholm took the initial advantage, but Balduc, who started right behind Byholm, followed him into second and then switched to the outside lane to sweep by before the first lap was completed.

Visiting former ABC Mod champ Robby Bunkelman worked his way around Byholm for second on lap 5, before Tyler Luger looped his car during the next circuit to bring out the first yellow flag and eliminate Balduc’s significant advantage. A lap after retaking the green flag, the field was slowed again when Cole Spacek’s car came to a stop after mid-pack contact.

Balduc had his hands full with Bunkelman and the seventh-starting Cook directly behind him for that restart, and under green Cook did all he could to get by the leader using the low groove of the smooth, sticky red-clay oval. But Balduc was fast around the high line and defended his position.

On lap 14 Bunkelman’s car mysteriously slowed on the back straight to stop the race again, and a lap after that the yellow flag was thrown for the final time for debris. From there Balduc and Cook battled side-by-side, with Tyler Vernon and Paul Niznik right on their tails. Cook drew nearly even with Balduc on a couple of occasions, including, coming to the checkers, and Balduc’s margin of victory was razor-thin – .077 seconds, according to official electronic scoring. Niznik overtook Vernon for third on the final circuit, and 12th-starting Paul Suzik was fifth.

Balduc set an early quick lap with a time of 16.517 seconds (81.734 mph). Spacek recovered from the early stop to finish eighth, but his points lead shrunk to just two as a result of Cook’s strong run. 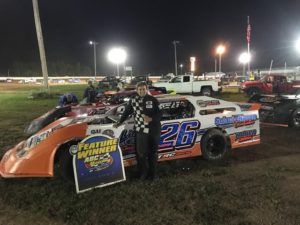 Kyle Copp of Brule led flag-to-flag for his first-ever win in the WISSOTA Super Stocks at ABC during Saturday’s 20-lap A-main. Copp started on the pole, beat Shawn McFadden Jr through turn 1, and then survived heavy pressure for the landmark win.

The intense battle for second behind Copp lasted much of the race and took its toll early, as Andrew Mackey, in a three-wide move for third, spun wildly and hit an infield marker tire on lap 2. The damage knocked him from the event as well as Matt Deragon, who was caught up in the incident.

Over the next seven green-flag laps McFadden and Scott Lawrence raced door-to-door for second, swapping the position, allowing Copp to scoot away. Divisional points leader Dave Flynn, who started eighth, weaved his way into the top five and joined the battle for second, but when he dove low on McFadden to try to take second on lap 9 he cause both cars to spin and was sent to the back.

The race ran caution-free from there, with Copp drawing away and McFadden and Lawrence still debating second. Lawrence eventually established himself as runner-up and, after closing the gap on Copp, threw every move he could at the leader. But the young second-generation speedster held off the wily veteran for a close .36-second margin of victory. Nick Oreskovich moved through the field late to take third and close the points gap on the fourth-finishing Flynn to just 26, and Steve Stuart came home fifth.

Superior’s Jack Rivord showed that his big-money win in last Saturday’s “Mid-Mod Madness” at ABC was no fluke, charging past Tanner Hicks just before mid-race and dominating the WISSOTA Midwest Modified feature.

Hicks took the initial lead for the 20-lap run from polestarter John Darwin and retained it after a lap 2 stoppage for Ryan Barningham’s slowed ride. Darwin was displaced on successive laps after the restart by Ross Fuhrman, Duane Dunbar and Rivord, and on lap 5 Dunbar got by Fuhrman for second. Rivord took third from Fuhrman two laps later, just before a Jesse Polson-Rick Siiter get-together slowed the pace.

Rivord’s car came to life on that restart, blowing past Dunbar and then Hicks over the next two laps. Diamond Bressette collected Polson for the final yellow flag of the race, and from there Rivord disappeared from the field, building a lead of over two-and-a-quarter seconds in just six laps and more than doubling that advantage over the final six for his second win of the season, while setting a quick-lap time of 17.316 seconds (77.963 mph).

Dunbar got around Hicks just after the restart and fended off 11th-starting Jesse Aho to claim second, and Fuhrman followed Hicks home for fifth. Marcus Dunbar took seventh, just one spot ahead of Jimmy Latvala, to extend his points lead over Latvala to 33 with two race nights left. 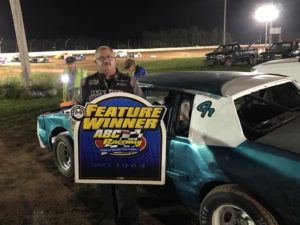 Granted, the field only consisted of six total cars. But Jorgensen, who was the sixth-place starter, had to get by points leader Tanner Gehl, quick teammate Aaron Bernick, and a determined Tyler Kachinske first, then pass an impressively-fast RJ Holly and defending track champ Randy Graham with a three-wide inside move to get to the front.

Holly’s bumping of an infield marker tire onto the track brought about the first of only two yellow-flag slowdowns on lap 2, but Jorgensen held firm when Graham threatened on the subsequent restart. Gehl’s spin with three laps left brought the field back to Jorgensen’s bumper, but the defending national Pure Stock champ was up to the task and drew away to a comfortable cushion at the checkers.

Graham fought back late challenges from Bernick for second, and Kachinske was awarded fourth and Holly fifth after a two-position penalty was assessed to Gehl for a “jump” of the final restart, allowing Graham to close to within 24 points of Gehl in the standings.

Graham strengthened his points lead slightly in the ABC Six-Cylinders with his fifth win of the season in the division’s 12-lap main event. The defending division champ from Trego took the lead after a first-lap restart and was uncatchable after that.

The restart was a result of Josh Saunders’ stopped ride before the field got to complete lap 1, but on that re-do Graham “threaded the needle” between front-row starters Jakob Bond and Adam Traaholt and then pulled away, with second-in-points Forrest Schultz working his way around Bond for third a lap later. On lap 2, heavy contact between Bond and Mathew Rohlfing put Bond’s car on its side and nearly over onto its roof before landing on all fours with significant damage. Neither driver was injured, but both cars were towed to the pits.

Schultz got by Traaholt for second on the restart but could not keep up with Graham despite setting the fastest lap of the race at 18.524 seconds (72.878 mph). Graham won by nearly two seconds and holds a 25-point lead on Schultz heading into next Saturday’s action, while Saunders, Jordan Pearce and Dominic Hmielewski completed the top five. 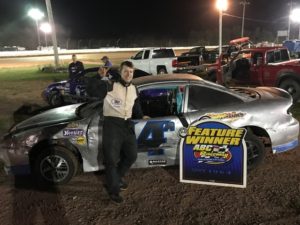 After visitors Logan Braford and Justin Barsness collected each other on the initial start, House stormed from the fourth row to get by polestarter Cully Butterfield on lap 3 for the lead. An impressively fast Casey Fitzpatrick worked his way around Butterfield to second a lap later, with Jarecki in tow to third, just before Braford hit the turn 4 guardrail hard to halt the run. Jarecki got by Fitzpatrick on the restart but couldn’t shake free to attack the leader, and Fitzpatrick retook second a lap later and frustrated Jarecki’s efforts from then on.

House’s win was his third of the season, to go along with his five runner-up efforts, and he extended his points edge to 28 on Jarecki. Mitch Kieber and Josh Rowe rounded out the top five.

The ABC Raceway will host its annual “Summer Blast” race night on Saturday, August 22, to be presented by Northern Wisconsin Fence of Phillips and Outlaw Wraps & Apparel of Ashland. Kids’ bike races have been added to the program on that night, and all six regular weekly divisions will be on hand for this next-to-last points-paying night of the 2020 season.