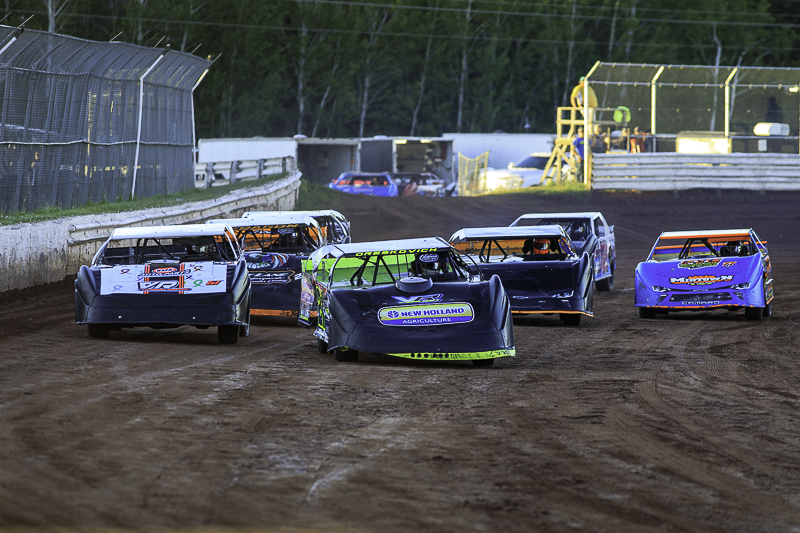 Ashland, WI, June 25 – On a night that seemed doomed by a late-arriving downpour, the fans on hand at the ABC Raceway on Saturday were instead treated to visits with their favorite drivers, a fast race track, and seven divisions of action – five of which provided either first-time feature winners or drivers returning to ABC’s victory lane after long absences.

Northern Clearing Inc’s “Racing for a Reason” fundraising night drew a packed house – thanks in no small part to the free grandstand admission price. The fans responded with thousands of dollars in donations to the sponsor’s designated charity causes through prize raffles, American Cancer Society button sales, split-the-pot ticket sales, and a chance to ride in the Raceway’s new two-seater WISSOTA Modified.

The cloudburst occurred around 5 pm – just over an hour before the 79 registered drivers were scheduled to take to the track for their hot-lap sessions. The rains turned the nearly perfectly-prepared red-clay oval into a quagmire, but the track’s prep crews went right back to work, grading and packing until the racing surface was even better than before the rains came.

Meanwhile, the racers brought their machines to the grandstand parking area – rather than onto the front-straight of the track – for the meet-the-drivers session, which was rescheduled from earlier this season. It turned out to be a very popular decision with the huge crowd on hand.

Along with the Raceway’s six regular weekly divisions, the Northern Renegades traditional sprints made the first of their two scheduled appearances this season, and Lucas Logue of Rush City, MN, made history for himself by capturing his first career feature win in Ashland.

After a hard wreck during heat-race action eliminated two of the eight traveling sprinters, Logue started the 12-lap A-main on the outside of the front row and scooted out to the lead right away, never to give it up despite the best efforts of Paul Schultz and Ken Hron. Logue worked the high line around the three-eighths-mile oval to near perfection as he pulled away to a half-second advantage in just five laps, and he extended that lead to 1.5 seconds in the late stages as Schultz fended off the determined Hron.

At the white flag Hron dove low to challenge, but Schultz fought back and retained second spot to the checkers, 1.35 seconds behind Logue. Jesse Grife and Zach Olson completed the top five.

Washburn’s Pat Cook took a different approach than Logue en route to his first Outlaw Wraps & Apparel WISSOTA Modified feature win in over two years, as he started from the pole and hugged the absolute bottom line around the northern Wisconsin speedplant to lead all 20 laps.

Over the first nine non-stop laps, Cook held off first rookie Jack Rivord and then Jack’s older cousin Rick Rivord as he toured the shortest route around the track. Behind the front three, Alex Van Natta had his hands full with a strong Jake Hiatt and a fast Brandon Copp, both of whom eventually overtook Van Natta before he spun on lap 9 to bring out the race’s only caution stop.

Cook never held more than a half-second lead throughout the first half of the race, but after the restart he stretched his advantage to over a second-and-a-half on his way to his 12th career feature win at ABC. Rick Rivord held on for a solid runner-up effort, and Copp made a slick three-wide move to get by Hiatt and Jack Rivord for third.

Cory Casari moved by polestarter Myron Basina for the initial lead, but within a lap he found himself in a battle with Mackey and Shawn McFadden, a battle that Mackey won by the time lap 2 had been scored. McFadden followed Mackey to second on lap 2 and spent the remainder of the run trying to hold off persistent challenges from Nick Oreskovich, with Casari and Scott Lawrence close behind. At one point the battle for second was six cars deep, but McFadden maintained his line as long as he could.

At the checkers Mackey held a 2.622-second advantage while putting slower cars a lap down, and behind him Oreskovich used a last-corner move on McFadden to steal second. Steve Stuart won a late-race battle with Lawrence for fourth.

Also appearing in Victory Lane for the first time in a while was former three-time track WISSOTA Midwest Modified champ Paul Suzik of Ironwood, MI, who dominated the first 14 non-stop laps but had to hold on over the final half-dozen circuits as caution slowdowns kept the field tight on his tail.

Ross Fuhrman set the early pace in front of polestarter Diamond Bressette, while Suzik moved quickly to third. Within two laps Suzik grabbed the lead away and wasted no time pushing his advantage to over a second-and-a-half on Fuhrman, with Oreskovich, pulling double-duty on this night, grabbing third.

Suzik was already putting backmarkers a lap in arrears by mid-race while building on a 2.5-second lead, and Fuhrman and friends could not cut into that margin until lap 14, when a two-car get-together brought out the race’s first yellow light. Oreskovich took advantage of the restart to steal second from Fuhrman, just before Sean O’Brien’s spin with four laps to go slowed the pace again.

Marcus Dunbar moved by both Fuhrman and Oreskovich after the green came back out to take second, but Mitch Kieber’s looped ride stopped the race again. Dunbar gave Suzik a serious threat over the final three laps, but Suzik held on for his first win here since May 2018. Brady Uotinen, Fuhrman and Oreskovich completed a close-knit top five.

Travis Hazelton of Chippewa Falls made it two straight in the win column after his hard-earned win in the WISSOTA Pure Stock feature. Hazelton started mid-pack – sixth on the ten-car grid – and completed a three-wide pass for the lead just before the ten-lap event’s halfway point to capture the win.

RJ Holly held off Kevin Bartelt early before Aaron Bernick and Tyler Kachinske moved into second and third, respectively, on lap 2. First-time visitor Jake Smith spun to bring about the first of three caution slowdowns, and a lap after the restart Kachinske slapped the front-straight wall hard while in the heat of a three-wide battle for third. Kachinske was unhurt but his car was badly damaged.

Bernick, who had edged ahead of Holly before Kachinske’s incident, got immediate pressure from Hazelton, who had restarted third. On lap 5 Hazelton used a three-wide move to get around Holly and Bernick and, after a restart for Cully Butterfield’s lap 7 spin, held on for the win.

Cory Jorgensen worked his way through to second, winning a tough late-lap battle with Bernick, with a charging Roger Walker fourth and Smith recovering for fifth.

Caution flags helped Groom’s cause greatly, as he started eighth on the 11-car grid. Anderson, meanwhile, started on the pole and paced the race with a badly smoking machine, just ahead of rookie Jacob Johnson. Mathew Rohlfing’s early spin caused the only delay over the race’s first six laps, during which Anderson stayed just in front of a battle for second among some of the division’s younger drivers – Johnson, Trenton Bond, Dalton Truchon, Jakob Bond and Jake Nevala. First Truchon grabbed the spot away, and then Nevala captured it, but before Nevala could complete a lap 6 pass for the lead, an Austin Olby spin allowed Anderson to restart out front.

Groom was in the top five for that restart and methodically picked his way forward over the next four laps before Julian Root’s spin with two to go put him on Anderson’s bumper for the restart. Olby spun again on the restart, but over the course of the green-white-checkered finish Groom used the outside line to pull alongside Anderson, who bobbled just enough coming to the white flag to give Groom the opportunity he needed.

Groom edged Anderson by a third of a second, while Truchon and Johnson crossed under the checkers side-by-side. But Truchon was penalized two positions in the final order for a “jump” of an earlier restart, giving Johnson third and Jakob Bond fourth.

The final winner of the night also may have traveled the furthest to race at ABC, as Justin Schelitzche of Chaska, MN, ran away with the Lightning Storm Graphics WISSOTA Hornets feature win – his first ever at Ashland.

Points leader DeJay Jarecki dove low at the drop of the green to pull alongside polestarter Brandon Hummelmeier, but contact between the two going into the first turn sent Jarecki spinning in front of the rest of the eight-car field. Jarecki ran to the pits for repairs and restarted at the tail of the field, while Hummelmeier was penalized to the back for the incident.

On the restart Schelitzche slipped past Holly and youngster Nathan Rose Jr to take the point, and he sped off from there to a huge lead en route to his landmark win. Within two laps Jarecki had passed Rose for second, but he had no chance to challenge Scheltizche, while Rose cruised home to third and Holly won a late battle with Hummelmeier for fourth.

On Thursday, June 30, the ABC Raceway will host its rescheduled Farm Stock Special, to be presented by White River Ag Products of Mason. The Modifieds ($2,500 to win), Super Stocks ($1,200) and Midwest Mods ($1,800) will run for heavily-enhanced purses as an ideal lead-in to Gondik Law Speedway’s Great Lakes Border Battle weekend on Friday-Saturday, July 1-2, and the ABC Raceway’s Six-Cylinders will also be in action on Thursday.

The grandstand gates and pits will open at 5 pm and hot laps will be run at 6:15, followed by heat-race action at 7 pm. WSBZ, 93.3 FM, will air updates from 4:30-6 pm on Saturday, with simulcasts online via the station’s website, www.wbszfm.com.