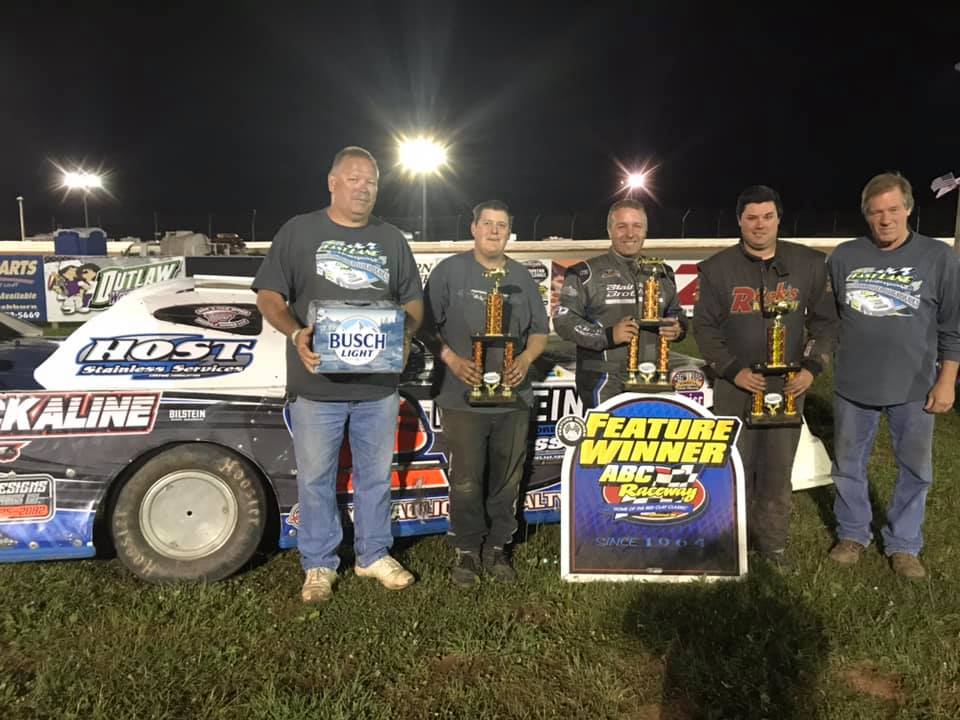 Ashland, WI, July 20 — In 2017, Dave Mass came to the ABC Raceway to compete in the FastLane Motorsports Northland Super Stock Series, and he led every lap to win his first-ever feature at the northern Wisconsin red-clay oval. He went on to claim the Series title a weekend later.

On Saturday, Mass led every lap of the FastLane Series feature at Ashland to claim his second-career feature win, putting him in a nearly perfect position for history to repeat itself.

The win at ABC was the third straight over the first four races of the Series for the veteran East Bethel, MN, speedster, after a second-place finish behind Tim Johnson in the tour’s opener at Oglivie, MN, the previous Saturday. It also gives him a solid points lead heading into the Series’ finale at the Proctor (MN) Speedway on Sunday, July 21.

With Halvor Lines of Duluth, MN, coming on board to help support the Series in its fifth season, a $700 winner’s check awaited the winner of Saturday’s 33-lap main event, with the race distance honoring the late ABC Raceway Hall of Fame WISSOTA Super Stock driver and car owner Don Koivisto. Mass started on the front row and swept around polesitter Shawn McFadden Jr for the only pass for the lead during the entire race, while defending Series champion Kevin Burdick came from the outside of row 4 to mix things up with Dave Flynn and Nick Oreskovich in an early top-five battle.

With Burdick working to get by Flynn for third on lap 2, Mass had already built up a lead of over a second on McFadden, and as the early laps stayed under green Mass continued to build on his advantage. Burdick used an outside line to move past McFadden on lap 8, but by then Mass’s lead was nearly two full seconds as he was beginning to contend with the tail end of the field.

A lap 11 tangle between Scott Lawrence and Tim Johnson put Burdick and McFadden on the leader’s back bumper for the restart, and Burdick immediately shot high and pulled alongside Mass in a challenge for the lead. But Mass overcame the threat and rebuilt his advantage, pushing to another lead of over a second-and-a-half before Don Muzzy’s spin slowed the pace again on lap 18.

Mass again pulled away as the green lights came back on, while 2015 Series champ Curt Myers appeared in the top five and battled with Flynn for a couple of laps for fourth. But Flynn held firm to the position and, on lap 24, took away third from McFadden. A couple of laps later, as Mass was slicing through backmarkers with relative ease, Burdick struggled before clearing the lapped Tucker Quinn, which seemed to rattle Quinn enough to cause him to loop his ride, forcing one last restart with three laps remaining.

Mass bolted away again for a final winning margin of about a second-and-a-half, while Burdick edged Flynn at the checkers for second. Myers came home fourth ahead of McFadden.

Six-time ABC Raceway track champion Al Uotinen grabbed the early advantage of the 20-lap WISSOTA Modified feature, but Ashland’s Steve Stuart put on a clinic on how to run the extreme high line, sweeping around Uotinen and running away to his 35th career feature win at his hometown track. Stuart started on the outside of the third row, but after just three quick laps he had pulled to the leader’s back bumper, and when Uotinen left the high lane open coming out of turn 2 on lap 6, Stuart flashed by.

Visiting Mike Anderson, who started directly behind Stuart, worked his way past Bill Byholm for third at about the same time as Stuart took over the lead, and after Kevin Eder’s ride crept to a halt on the track on lap 8, Anderson was in a prime position to contend for the win, as he overtook Uotinen on the restart.

A Tyler Luger spin on lap 12 tightened the field up again, and a four-car pile-up that collected Uotinen, Jeff Spacek and Bill Byholm – all top-five runners at the time – negated the restart attempt. Once under green, however, Anderson had a couple of opportunities to steal the lead away, but Stuart maintained his momentum and ran off to a winning margin of 1.744 seconds. Spacek grabbed third from Uotinen just prior to the restart, and Pat Cook got by Uotinen just after the green came back out to take fourth.

Visiting Shane Halopka of Greenwood took advantage of a late-race restart to grab his second WISSOTA Midwest Modified feature win in just his third visit here in 2019. Halopka started outside on the fourth row but was already in fourth when polestarter Gunner Peterson and Ross Fuhrman made hard contact while battling for second after the first lap of the race, sending Peterson to the pits to make repairs.

On the restart Fuhrman slowed and sank through the field, allowing points leader George Dalbeck to slip past Halopka into third, behind leader Justin Weinberger and David Simpson. On lap 5 Simpson worked his way past Weinberger, and he built himself a one-second lead over the next four laps until Weinberger could no longer hold back Dalbeck’s charge.

On lap 14 Dalbeck caught and passed Simpson, aided by the fact that leader got caught behind the slower Ryan Barningham. Halopka had just gotten by Weinberger for third on the same lap, just before Weinberger and fifth-running Brandon Copp tangled in turn 2. Dalbeck worked his way around Simpson three laps after the restart, and Peterson’s car spun again on lap 17, forcing a three-lap shootout.

Contact between Simpson and Dalbeck on the restart slowed both cars, allowing Halopka to dive low to take the lead. Dalbeck charged back and pulled alongside Halopka coming out of turn 4 in a drag race to the finish, but Halopka won by 64 one-thousandths of a second. Fourteenth-starting Jesse Aho also took advantage of the Simpson-Dalbeck bump to take third, just ahead of Simpson and Marcus Dunbar.

Superior’s Jared Akervik sped away from the pole to win his first-ever WISSOTA Pure Stock feature at the ABC Raceway on Saturday, just an hour or so after winning his first-ever heat race here. Akervik stayed just ahead of a tight three-car battle for second between Cory Jorgensen, Weinberger and Randy Graham for the first half of the 15-lapper, but after Brandle Pupp and visiting Brent Miller got together to bring about a lap 7 yellow flag, Akervik fended off a strong outside challenge by Graham and scooted away to a relatively comfortable win.

After Graham could not make his pass for the lead stick, he and Jorgensen wrestled over second spot until Graham eventually gained the position, but Jorgensen was right on his tail for third. Weinberger caught up to the pair to finish a close fourth, and Pupp was a distance back in fifth.

Graham turned a tight-formation battle in the ABC Six-Cylinder headliner into a bit of a laugher, winning by a margin of well over eight seconds. The divisional points leader from Trego started eighth out of the 11 cars on the grid and was in the middle of a six-car logjam for third when contact forced Jordan Pearce’s car to snap suddenly to the right. He barely avoided heavy contact with the front-straight concrete wall and was able to continue, and as the race stayed under green Graham had maneuvered his way into fourth, behind leader Adam Traaholt, Jake Nevala and DeJay Jarecki.

Unfortunately for Pearce, his car was damaged enough that he lost control and hit an infield marker tire on lap 2. On the restart Jarecki moved by Nevala to second, and two circuits later Jarecki overtook Traaholt for the lead. Graham followed Jarecki into second a lap later, and the lead duo battled side-by-side for a bit before Graham took control.

Graham built up a comfortable cushion over the next few laps, which grew significantly when Jarecki’s car slowed with five laps to go. The lead was more than a straightaway as Graham crossed under the checkers for his fourth win of the season in the Sixes, while Bubba Anderson took second away from Traaholt with four laps to go. Dalton Truchon, Forrest Schultz and Jonathan Popp all got by Traaholt over the closing laps as well and finished third through fifth in a close-knit pack.

The ABC Raceway will close out the July portion of its 2019 schedule on a fast-paced note, as the high-powered Interstate Racing Association’s 410 winged outlaw sprints will take to the red-clay oval on July 27. The program, to be presented by the NAPA Auto Parts Stores of Ashland and Washburn, will spotlight these 800-horsepower machines as they reach triple-digit speeds on the three-eighths-mile oval.

The show will also include the WISSOTA Modifieds, Super Stocks and Midwest Mods, plus the ABC Six-Cylinders. The WISSOTA Pure Stocks and Hornets are currently scheduled for a night off, but that may change during the course of the week.

All photos by Shooterguy Action Photography 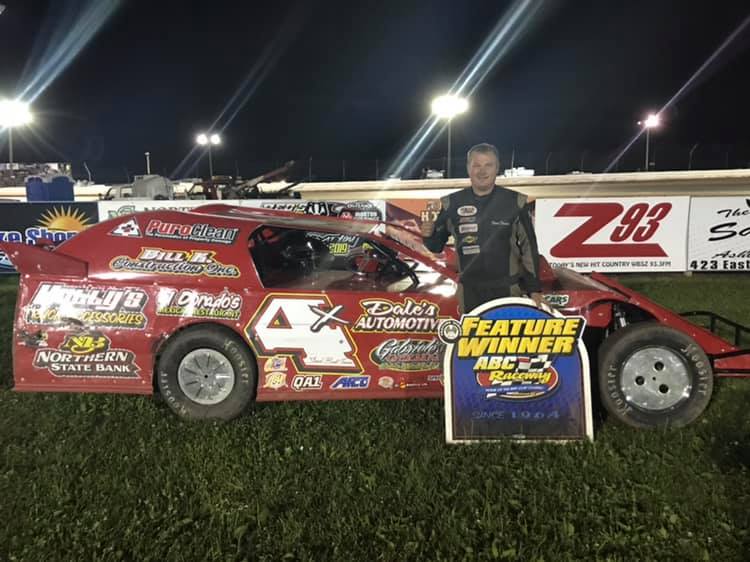 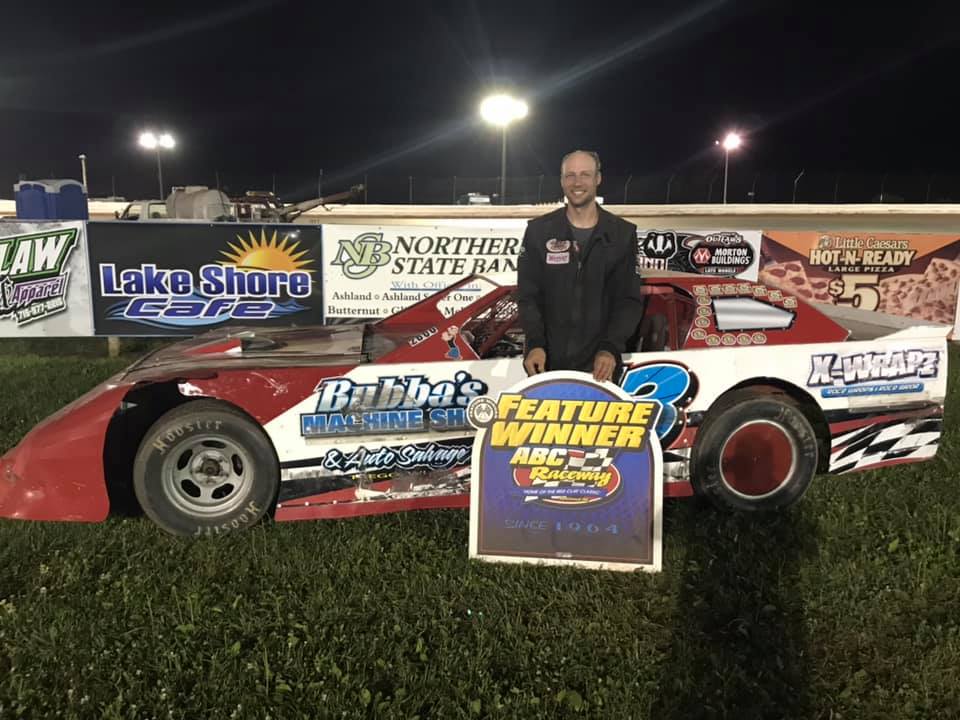