Ashland, WI, August 24 – In a wild and wooly climax to the 2019 regular season, Steve Stuart edged Jeff Spacek by one point to capture the WISSOTA Modified points championship at the ABC Raceway. 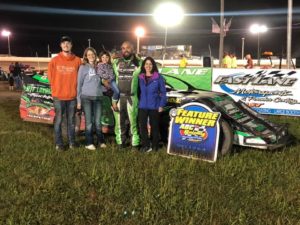 The Modifieds points battle was the evening’s lead story, with Spacek leading Stuart by just three points heading into the feature, which was appropriately saved as the conclusion of the 18-race program. Stuart started outside on row 2 for the 20-lapper, while Spacek was on the inside on row 3, but the initial start of the race was waived off when Neil Balduc bobbled in turn 4 and several cars piled up behind him as a result.

The remainder of the run went non-stop, with Jeff’s son Cole Spacek edging ahead of Steve Lavasseur initially before Lavasseur fought back to take control on lap 2. Stuart and Jeff Spacek were side-by-side on that restart, and the senior Spacek beat Stuart on the high side to take third.

Lavasseur steadily drew away to a lead of nearly two seconds as Spacek Junior fought to hold off his dad and Stuart. Finally, on lap 9, the younger Spacek gave up second to his father and third to his father’s championship challenger. Within five quick laps, Jeff Spacek trimmed Lavasseur’s lead down to a couple of car-lengths, with Stuart in tow.

On the final lap Stuart looked to back off a bit, but it was only to make a run at Spacek going into the final turns. Stuart dove low in turn 3, then slid up the track in turn 4, seemingly hoping to complete a successful “slide-job” on the six-time track champ to take second place. However, Stuart’s car didn’t quite clear Spacek’s and the pair collided, with Stuart’s car making heavy contact with Spacek’s, and Spacek’s car making equally significant contact with the front-straight concrete wall. As Lavasseur, from River Falls, grabbed his first win of the season here by just a shade over one second, Stuart and Spacek slid across the finish line in a grinding crash, with Stuart’s car ahead by its nose and motor. Both cars then spun to a stop on the front straight, forcing the rest of the field to weave through the carnage, with Stuart scored as second and winning the championship by a single point.

Cole Spacek was a distant fourth-place finisher, just ahead of Pat Cook. 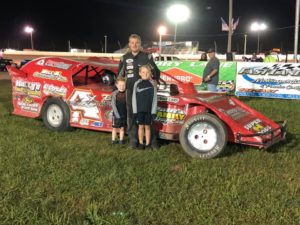 In Victory Lane, the Ashland native was very reserved with his excitement considering he had just won his sixth career championship at ABC. “I have nothing but the greatest respect for Jeff,” he said. “I don’t know – it is what it is, I guess.”

Oreskovich basically had his fourth straight WISSOTA Super Stock title wrapped up as soon as he took his car off the trailer at the track, and while his seventh-place feature run wasn’t a thing of beauty, the consistency shown all season long by “the Flyin’ Farmer” from Mason was well rewarded.

Early on Lawrence cruised away to healthy advantages, but once Cory Casari wrestled control of second place from Patrick Beeksma, Lawrence couldn’t shake loose of the young Montreal pilot.

On the second attempt of a lap 9 restart, Dave Flynn – who started 11th – began an assault on Casari for second that lasted better than two laps before Flynn was victorious. On lap 14 Flynn then moved alongside Lawrence, repeatedly diving low while Lawrence ran the perimeter, until he finally slipped past for the lead. As they came to the white flag Casari also got by Lawrence with an inside pass, and Casari followed Flynn at a brief distance to the checkers. 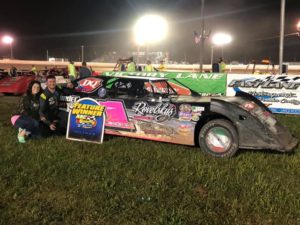 Before making his way to the infield scales, Flynn was advised of a two-position penalty for a “jump” on one of the restarts, which awarded Casari with his second win of the season and gave second to Lawrence. Kyle Copp came home fourth, and Terran Spacek, who went to the pits for repairs incurred during an early-race wreck, recovered for fifth-place money. 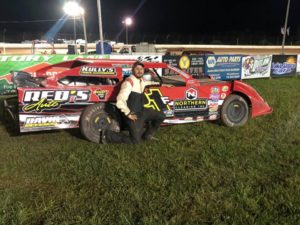 Oreskovich’s final points margin was 71 ahead of Casari, who jumped past Copp in the final tally. Oreskovich becomes only the third driver in Raceway history to post a streak of more than three consecutive points titles, along with Lawrence (11) and Don Copp (six).

Although the WISSOTA Midwest Modified feature struggled to get to its conclusion, it was well worth the wait for both points champ Dalbeck of Wakefield, MI, and race winner David Simpson of Thunder Bay, ON.

Jack Rivord’s spin delayed the initial start of the 20-lap affair, but Simpson took the lead away from polestarter Ryan Barningham after the first couple of green-flag laps and held it for the remaining distance. Simpson, who needed a top-three finish plus some bad luck to befall Dalbeck in order to take the division crown, held tight to the lead despite a series of slowdowns and stoppages that tested his resolve. 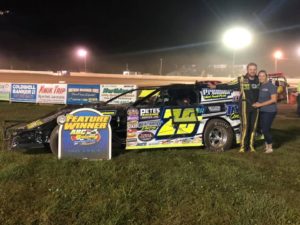 Simpson opened up a couple of one-second cushions during some four- and five-lap green-flag spurts during the first two-thirds of the run, only to have the field brought back to him for restarts. One of the restarts was brought about when a Brandon Copp spin took him out of a top-three run; another followed soon thereafter when second-running Ross Fuhrman’s car got loose and slowed, forcing several of his fellow frontrunners to duck and dodge to avoid him and allowing Tyler Vernon to take second and bring Dalbeck with him to third. 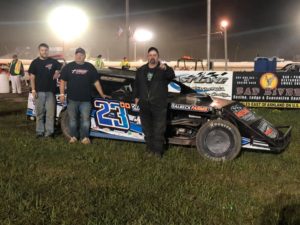 Dalbeck got by Vernon on a lap 16 restart, and he stayed there over a three-lap sprint to the finish after a Bryan Lund spin to secure his second ABC Raceway title, with the other coming in 2011. Simpson’s second feature win of the season helped him make Raceway history as the only Canadian-born driver to finish in the top-five in points here – second to Dalbeck by 32 – while Vernon, 18th-starting Justin Weinberger and Duane Dunbar completed the top-five in the race.

It took efforts in back-to-back features for Graham to make a little ABC Raceway history of his own, becoming the first driver to win two divisional titles in the same season here. The Trego racer had the ABC Six-Cylinder title sewn up upon arrival, with a healthy lead over Ashland’s Forrest Schultz, and he finished second to Schultz in the Sixes’ 15-lap A-main.

After a two-car spin on lap 1, polestarter Jonathan Popp ran away to a strong lead over the first 12 laps of the run, while a seven-car logjam for second ensued over most of that distance. Jordan Pearce held the runner-up spot, but various drivers threatened to take it away as Popp pushed his lead to well over three-and-a-half seconds as the laps would down.

The only thing to keep Popp from a runaway first-career feature win was a late caution flag – but, unfortunately, he was the cause of one, as his car broke down and coasted to a stop at the start-finish line with three laps to 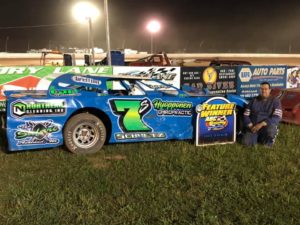 go. This put Pearce at the point for the restart, but he was overtaken by Schultz down low and Graham up high as the white flag waived. Less than one second separated the tightly-packed front five, with Schultz nipping Graham by .078 seconds for his first win since July 2015. Pearce, Matt Deragon and 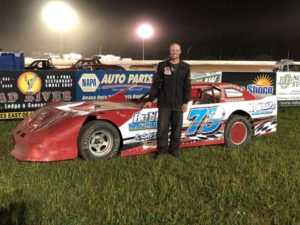 The championship margin for Graham was 79 points over Schultz.

Graham’s other title came in the WISSOTA Pure Stocks, where he successfully defended his 2018 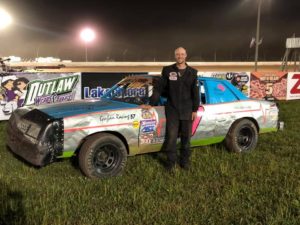 crown. He held a 23-point advantage over Weinberger coming into Saturday night’s action, but a combination of Weinberger having a secure grip on second place and the need to haul step-dad Shane Kisling’s new Modified to ABC for a shake-down run allowed Weinberger to leave the Pure Stock home.

Rookie Mikey Blevins looked very impressive in leading most of the 12-lap Pure Stock main event, scooting away from Brandle Pupp and the rest of the field from his outside-front-row start. After first-time visitor Dawson Kimble spun with a lap in the books, Blevins led the next seven circuits as the race stayed under green, while Cory Jorgensen charged back through the field after being penalized for Kimble’s spin.

Jessie Mudgett’s spin with four laps left brought the field back to Blevins’ rear bumper, with Jorgensen restarting in second alongside Graham. 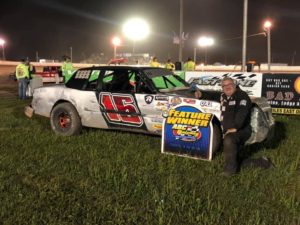 Jorgensen dove low to take the lead away, and after one last stop with three to go for first-nighter Tanner Gehl’s stalled ride, the Duluth, MN, veteran racer fended off the rookie by less than half a second for his first-ever feature win at ABC. Graham was a close third, followed by Aaron Bernick and Pupp.

The final Pure Stock tally will show Graham winning by 125 points over Weinberger, but that will not tell an accurate story of how competitive the 2019 season was between these two racers here. 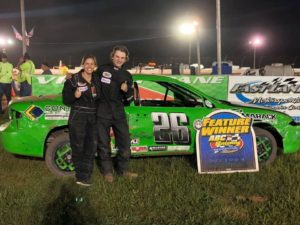 Kachinske was dominant throughout the event, taking the lead within the first couple of laps after a row 2 start and running off to a final advantage of nearly a full straightaway. Hunter McDougall worked his way through from row 4 to take second midway through the scheduled distance but couldn’t cut into Kachinske’s lead, although his runner-up finish was enough to move him to second place in the final standings, where the top four were separated by only 41 points.

Paul Ripley, Kachinske’s mother Kristy Marken, and Mitch Kieber, who picked up a replacement car this week to replace the one that was badly damaged in an incident here last Saturday, completed the top five. 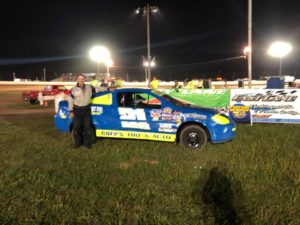 George, who started eighth but slipped back to ninth at the finish, held on for the historic title despite his lead being trimmed from 31 to just 16 points.

The Board of Directors and all-volunteer staff of the ABC Raceway will take some time over the next few weeks to prepare the award-winning northern Wisconsin oval for one of the Upper Midwest’s most exciting and prestigious events – the 44th annual Red Clay Classic, presented by FastLane Motorsports of Ashland and Tim’s Automotive Machine of Bloomer, to be held on Friday and Saturday, September 27-28. Over 200 WISSOTA Late Models, Modifieds, Super Stocks and Midwest Mods are expected to compete for a share of a total purse again slated to be in excess of $100,000.

Information on ticket prices and event times are available on the track’s website and will be detailed in an upcoming release, and “Race Night” will air on WBSZ, 93.3 FM, and also stream live on www.wbszfm.com and via the free Heartland Communications Group radio app during both nights of the event with up-to-date track news and weather updates.