Ashland, WI, August 17 – Superior’s Jared Akervik took the lead early and pulled away for his third win of the season at the ABC Raceway during Saturday’s “Pure Excitement” feature.

The 16th running on the special event for the WISSOTA Pure Stocks was part of the Raceway’s “Summer Blast” fan-appreciation program, presented by Northern Wisconsin Fence of Phillips and Outlaw Wraps & Apparel of Ashland. Thanks to a huge effort put forth by Pure Stock racer Brandle Pupp of Highbridge in the dozen or so days leading up to the weekend, businesses, race teams and fans contributed to a purse that, combined with the amount set for the event by the Raceway, nearly reached $4,500 and paid Akervik at least $700 for his win. 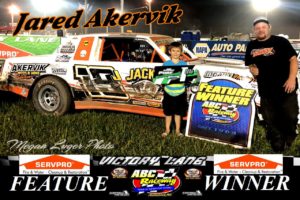 Akervik, who has been on a roll over the past two months at Northland area tracks, started the 15-lap feature on the pole and battled with Cory Jorgensen before a two-car tangle stopped the event after just one lap had been scored. Jorgensen led the field back to green, but Akervik dove low to make a pass for the lead, and from there he held off all further challenges.

A spin by visiting Dusty Caspers on lap 2 forced Dylan Shelton and Jeff Christman to take evasive action, with Shelton and Christman each pounding the turn 3 guard rail, but all three were able to continue. Akervik then gradually pulled away as the field chalked up several uninterrupted laps, eventually leading by as much as 2.7 seconds. 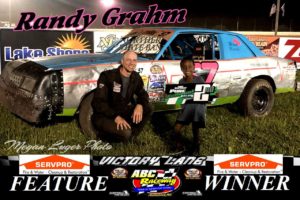 Behind Akervik, divisional points leader Randy Graham got around Jorgensen for second to try to put as much distance between himself and second-in-points Justin Weinberger as possible. Weinberger maintained a solid fourth-place posting and made several attempts to get by Jorgensen late in the green-flag run.

With three laps left some debris on the track forced Jorgensen to spin to avoid it. Over the final laps Akervik pulled away to a winning margin of just shy of a full second over Graham, with Jorgensen holding on for third and a recovered Shelton overtaking Weinberger late for fourth.

Graham holds a 23-point lead on Weinberger as he attempts to win a second straight Pure Stock title with one race night remaining. 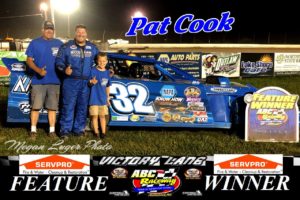 Pat Cook of Washburn led every lap and survived a stout challenge to win his first WISSOTA Modified feature in over two seasons. Cook started on the outside of the front row and outran polestarter Tanner Byholm for the early advantage, which was cut short by Tyler Luger’s lap 1 spin. Cook then sprinted to a lead of over 1.8 seconds as Paul Niznik gave up third to Steve Lavasseur, then fought to take it back and gained second from Byholm to boot before several spun cars clogged up turns 3 and 4 right in front of the leader on lap 5.

Steve Stuart shot through traffic from his seventh-place restarting position as the race resumed, but in his haste to get to the front he made hard contact with Lavasseur, causing his racer to spin into turn 3 and knocking Lavasseur from contention. Jeff Spacek, who came into the night second to Stuart in the “big Mod” points standings, sped past Niznik and Bill Byholm into second on the re-do just before Stuart spun again on lap 8.

After a lap 10 stoppage for debris, Cook and Spacek began what looked to be an epic side-by-side battle for the win while pulling away from Niznik and everyone else. Cook maintained a smooth upper-groove line while Spacek tried every trick he could to either edge past the leader or shake him into making an error. A Neil Balduc spin in the closing laps gave Spacek one last shot, but Cook held on for a thin victory by nearly two-tenths of a second. Spacek was docked two positions for a jump on an earlier restart, which awarded Niznik second and Balduc third, and Jeff’s son Cole Spacek rounded out the top five.

Despite the penalty and thanks to Stuart’s difficult night, Jeff Spacek overtook Stuart in the championship standings and will carry a three-point edge into the season finale. 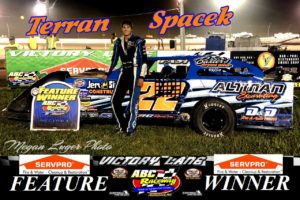 Another Spacek was completely dominant on this night, as Jeff’s nephew and Cole’s cousin Terran ran off with the WISSOTA Super Stock feature win. Spacek started on the outside of the front row, beat Scott Lawrence through the first turns, and led every circuit of the non-stop 20-lapper.

An early skirmish just behind the leaders nearly stopped the race before it could get started, as Dave Flynn and Greg Kuklinski made heavy contact while debating fourth. Kuklinski’s car became very loose and bounced off of several others, but over the course of about a half-lap everyone straightened out their racers and resumed the course.

The scramble allowed Spacek, Lawrence and Matt Deragon to draw away, and by lap 6 Spacek’s advantage on Lawrence was over two seconds. Flynn and Kyle Copp had caught up to Deragon, creating a great three-car dogfight for third, and Deragon held his ground and forced his challengers to try a number of different tactics, but eventually Flynn figured out a way by, taking over the spot on lap 14.

Spacek began putting slower traffic in arrears just after mid-race, and his lead continued to grow until he reached the checkered flag a full 4.7 seconds ahead of Lawrence for the win. Flynn was a distant third, ahead of Deragon and Copp.

Nick Oreskovich, working on a fourth consecutive Super Stock title at Ashland, holds a significant 83-point cushion on Copp with one night to go. 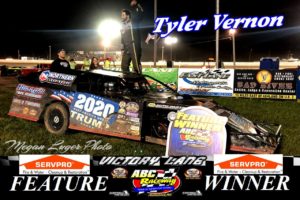 Last week, Ashland’s Tyler Vernon jumped into someone else’s Six-Cylinder and won that division’s “Summer Sizzler” special. On this night, he drove his own WISSOTA Midwest Modified to his second feature win here in as many weeks. 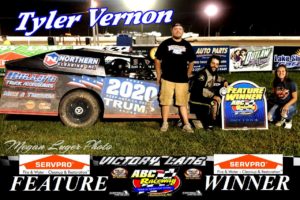 Veteran racer and former track champ Duane Dunbar took the early advantage from polestarter Clay Passuello and towed Jimmy Latvala along into second. Vernon picked his way forward methodically, taking third from Passuello on lap 2, then working for several tours before clearing Latvala for second on lap 7, just before a Ryan Barningham-Bryan Lund get-together in front of the leader stopped the run.

Divisional points leader George Dalbeck took advantage of the restart to quickly claim third, just before Bill Muhlig’s motor trouble ended his night. At the time of the yellow flag Vernon held a seven one-thousandths of a second edge over Dunbar and therefore restarted at the front, and the 2017 track champ led every remaining lap, although three more quick caution stoppages didn’t allow him to get far away. In fact, Dalbeck had nipped Vernon at the stripe for the lead had lap 11 counted, but a Weinberger spin before that circuit was scored negated the pass.

Vernon pulled away to a final margin of victory of 1.882 seconds on Dalbeck for his first feature win in a Mid-Mod here in over two years. Jack Rivord weaved his way from his ninth-place starting spot to take third, and David Simpson followed as a close fourth, just ahead of Dunbar’s son, Marcus Dunbar.

Dalbeck, the 2011 ABC champ, added a little more to his points margin over Simpson, bumping it to 37 going into the final night. 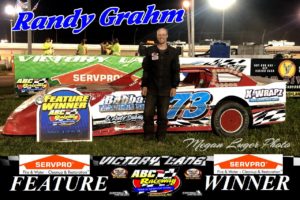 Graham seems well on his way to the Raceway’s Six-Cylinder title, as he chalked up his track-best fifth feature win in that division. Despite starting eighth on the grid, he took advantage of an early restart and drove to the front.

Polestarter Josh Saunders held off Jordan Pearce to set the early pace, but DeJay Jarecki’s lap 1 spin after contact with Pearce delayed the proceedings. Graham had gained three positions prior to the restart, and he worked around Bubba Anderson and Forrest Schultz to gain third within a lap back under green. Jarecki went up a lane to attack Saunders for the lead, but that left the bottom open for Graham, who snuck by on lap 4. Graham then went back to the outer line a couple of circuits later to get around Saunders for the lead.

Other than a yellow flag for Devin Dalbec’s stalled ride on lap 11, the balance of the 15-lapper went smoothly for Graham, who held a 1.8-second lead at the final stripe. Schultz grabbed second from Saunders just after the last restart, and Jarecki and Jake Nevala filled out the top five.

Graham’s lead on Schultz in the points is 84 heading into the season finale. 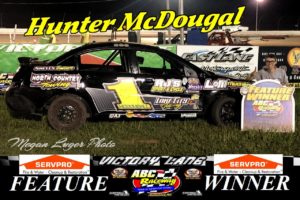 The WISSOTA Hornets clicked off their ten-lap A-main without a slowdown, and Hunter McDougall of Duluth, MN, became the first driver to win three features in the division at ABC.

Derek Dunbar got around polestarter Dayna Marken to take the initial lead, with McDougall right on his rear bumper. Within a couple of laps McDougall found a way by Dunbar in the low groove, but Dunbar fought back the next time around. Right behind them, Marken and Paul Ripley raced door-to-door for third.

With four laps remaining McDougall made one last inside move for the lead, and when it stuck he ran away to a dominant win. Ripley followed in McDougall’s tire tracks to get by Dunbar for second, and the division’s points leader, Paul George, came through the heavy traffic for third, just ahead of Marken and Dunbar.

George will look to become the ABC Raceway’s first-ever Hornets points champ as he carries a 31-point lead on Dunbar into the final night of the season.

Several race teams and local businesses donated prizes that were given away as part of the fan appreciation celebration. The ABC Raceway extends its thanks to Benoit Cheese, the Burger Barn, Chicago Iron & Supply, Dave Flynn Racing, Kwik-Trip, the Lake Shore Cafe, Moore’s on Main, the Northern State Bank, Traaholt Racing for their generosity.

The ABC Raceway will crown its 2019 points champs in all six divisions on Saturday, August 24, when Mountain Dew, North Star Beverage of Hurley, and WIMI-FM of Ironwood, MI will present “Championship Saturday Night.” The grandstands will open at 5 pm, hot laps will start at 6:15, and the first green flag of the night is set to fly at 7 pm. “Race Night” will air on WBSZ, 93.3 FM, with up-to-date track news and weather updates every 15-20 minutes from 4:30-6 pm; coverage will also stream on www.wbszfm.com and on the free Heartland Communications Group radio app.