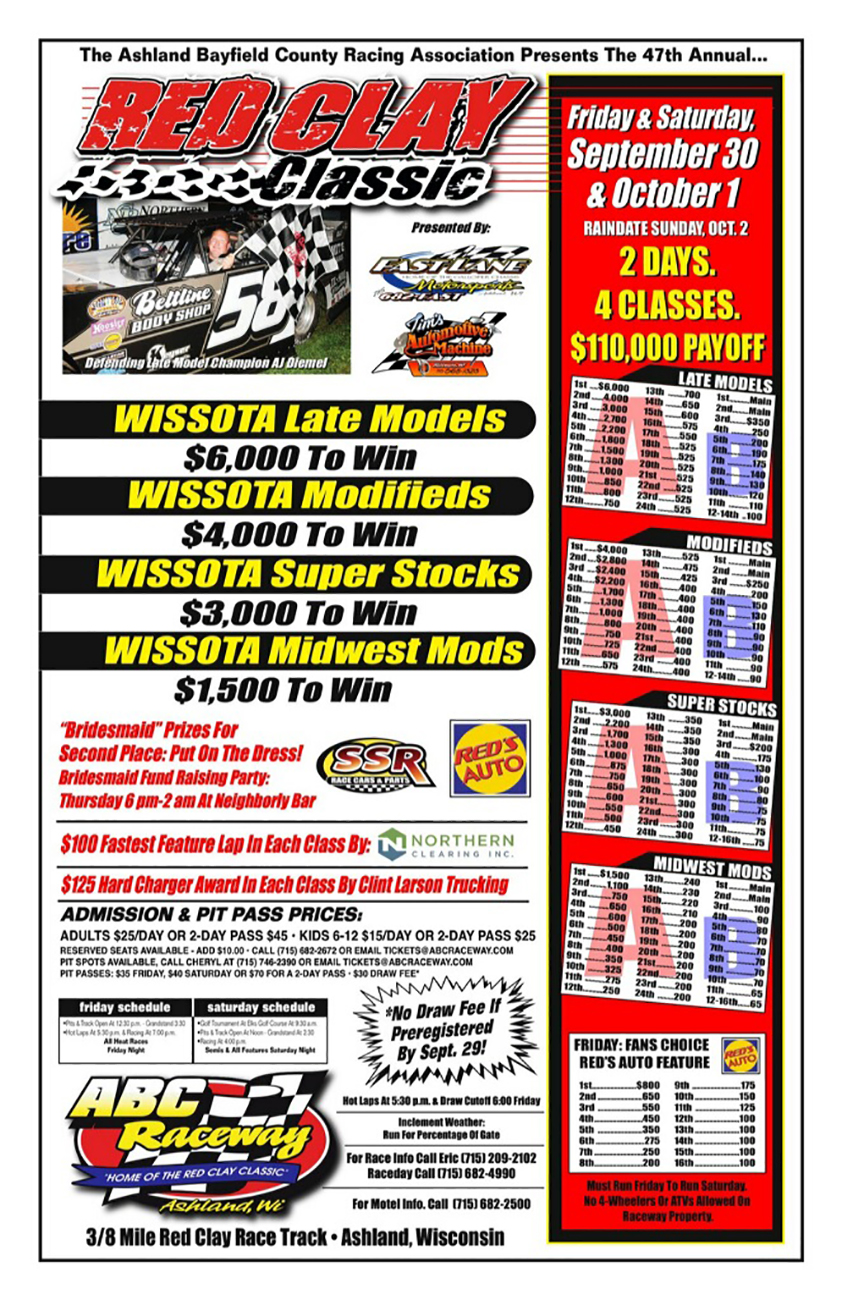 Ashland, WI, September 24 – Now that the Upper Midwest is in the midst of cool, crisp Fall weather, stock car racers and their fans are taking in the high-profile, big-purse post-season programs that tracks throughout the region host from Labor Day through mid-October.

And of all the post-season shows in this region, few are as prestigious or as anticipated as the ABC Raceway’s Red Clay Classic.

The 47th edition of this end-of-season tradition, to be presented by FastLane Motorsports & Custom Powdercoating of Ashland, Red’s Auto of Ironwood, MI, and Tim’s Automotive Machine of Bloomer, will be held on Friday and Saturday, September 30-October 1, at the award-winning northern Wisconsin oval located just south of Ashland. This year’s version will again entice upwards of 200 WISSOTA-sanctioned Late Model, Modified, Super Stock and Midwest Modified racers to compete on the historic three-eighths-mile red-clay oval for their share of a purse in excess of $110,000 – one of the area’s largest payouts for a dirt-track stock car racing event.

The big money being offered and the chance to see drivers from as many as six different states and two Canadian provinces regularly draws well over 4,000 ardent fans from these same locales – and sometimes even further – to converge on the Chequamegon Bay area for a weekend of fun and excitement, as well as a family-style atmosphere, as many use the opportunity to gather with their fellow fans one last time until next Spring brings a new racing season.

Every track hosts some sort of season-closing event – commonly referred in racing circles as “invitationals,” although they are certainly open to all fans and any racers with a car that meets the proper rules. Some track promoters may even hold two or three extra events after the regular season has run its course. But the Red Clay Classic has become somewhat unique in that many racers and fans see the event as a fitting end to a long race season, based as much on the many goings-on supporting the event as on the racing action itself.

“The Red Clay Classic is something special to our racers and fans,” stated ABC Raceway Board president Eric Erickson recently. “It started out as the very last race event held among our local tracks, and many fans continue to see it that way.

“Because of that reputation, we continue to look for ways to make the Classic a bit more than just a great racing weekend, and the fans and racers have responded by coming back year after year, and bringing new fans along as well.”

All the effort of the Raceway’s all-volunteer staff in preparing for the Red Clay Classic seems to have paid off, as once again there will be much more to the weekend than just racing. As one fan who has been attending the Classic for well over 30 years has often put it, “It’s the best last race of the year.”

As in years past, the Ashland Area Chamber of Commerce has worked closely with the Raceway to make Ashland and the Chequamegon Bay area a welcome destination for race fans during RCC weekend. Special sales events held by downtown merchants, farmers’ markets, and various sightseeing opportunities have been enjoyed by many visiting here for the races.

The Raceway itself holds costume and campsite-decorating contests each year for the fans to partake in, for fun and prizes. (By the way, this year’s costume theme is “Superheroes.”) Also, a fireworks display adds to the pomp and pageantry of Saturday’s feature races.

The Raceway will once again have deejay-provided music at the track after Friday’s preliminary races, giving fans an opportunity to enjoy even more fun with friends.

Some years back, the Neighborly Bar of Ashland became a popular pre-weekend spot for racers and fans alike to gather and “let off a little steam” before the race weekend began. In time, the popular local tavern, with help from former ABC Raceway Modified track champion Kevin Eder, started a “Bridesmaid’s Challenge” fund, raising money through raffles and other activities at the tavern to create a bonus fund to be divided among the second-place finishers of Saturday’s features – provided they put on a formal gown in Victory Lane after their race.

One newer event that provides the fans a chance to be more involved with the racing is the Red’s Auto Fans’ Choice feature on Friday night. Fans can go to the ABC Raceway’s FaceBook page to vote for their favorites from those drivers pre-registered for this year’s Classic. The top 16 vote-getters will be entered into a race that pays $800 to win and $100 to start.

Other events, such as the annual golf scramble at the Chequamegon Bay Golf Course, downtown trolley rides, and more have added to the allure of the Red Clay Classic in recent years. And, of course, the on-site camping that the Raceway and its cooperative neighbors provide draws over 350 RVs each year to stay at or near the track, helping to make the ABC Raceway the second-largest populated community in Ashland County – at least for that weekend.

“The Red Clay Classic has, in some ways, become a bit of a standard for post-season race events in our region,” said Erickson. “Many tracks have drawn from the things that we do here, and some have improved on them. We just need to keep doing what we do well – and keep adding to our event – to make sure that the fans and racers continue to attend.”

More information regarding the ABC Raceway and the 47th annual Red Clay Classic are available on the track’s website, www.abcraceway.com, and via its FaceBook page.

Pit admission prices – $35 per person Friday, $40 per person Saturday, or $70 two-day pass; driver draw fee waived if driver pre-registers by Sept 29 via My Race Pass app or website; drivers must race on Friday in order to be eligible to race on Saturday

Camping info – all camping sites on Raceway grounds have been reserved for 2022 RCC; primitive camping available only at privately-owned neighboring properties marked as such on first-come-first-served basis

The staff of the ABC Raceway will now take a few weeks to prepare for the 47th annual Red Clay Classic, to be presented by FastLane Motorsports & Custom Powdercoating, Red’s Auto, and Tim’s Automotive Machine on Friday and Saturday, September 30-October 1. Over 200 WISSOTA Late Models, Modifieds, Super Stocks and Midwest Mods are expected to compete for a total purse in excess of $110,000 in one of the most prestigious dirt-track stock car racing events in the Upper Midwest.

More info will be provided in the coming weeks regarding the Red Clay Classic. The ABC Raceway is located 3-1/2 miles south of Ashland on State Highway 13 and one mile west on Butterworth Road. For information, log on to the track’s website, www.abcraceway.com.