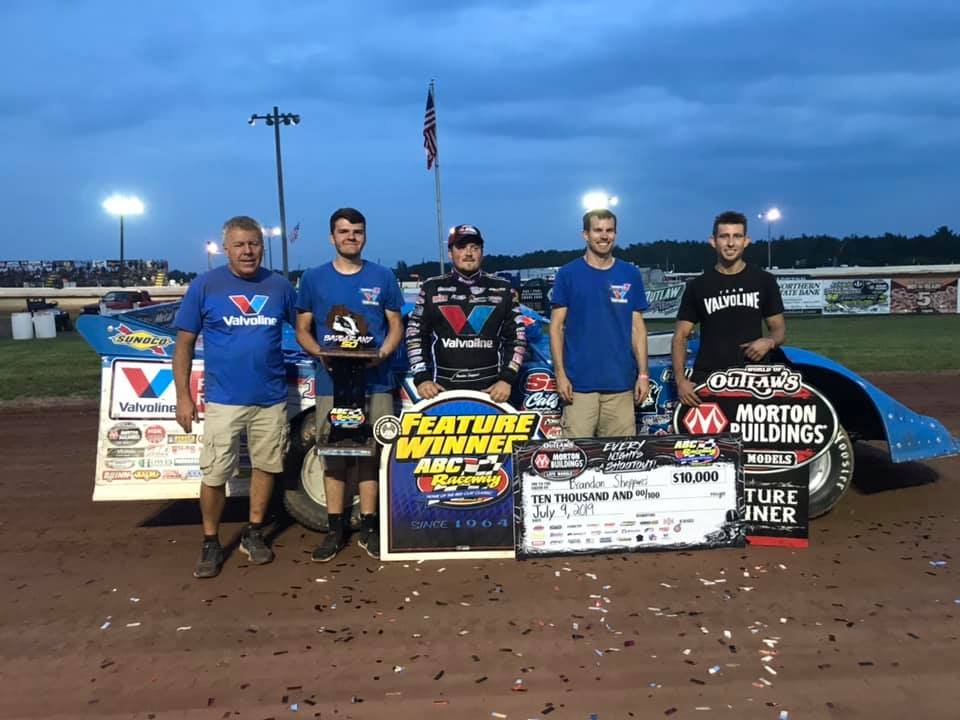 The WoOLMS national touring series, which features high-powered versions of the popular Late Model style of short-track dirt race cars, drew the top ten drivers in its championship points standings leading into the event. They were joined by 15 WISSOTA and Dirt King Late Model Series drivers to compete for a track-record $10,000 winner’s check, with each of the 25 entrants taking home a minimum of $1,000 just for starting the 50-lap A-main.

Sheppard, the Series’ points leader heading into Tuesday’s show, beat Ricky Weiss to the front and established a blistering pace, posting the fastest lap of the event early with a 14.881-second (90.720 mph) tour of the sticky three-eighths-mile red-clay oval on lap 7. The battles behind Sheppard, Weiss and Shane Clanton were ferocious, as Jimmy Mars, Cade Dillard, Nick Anvelink and Darrell Lanigan ran in close formation while debating fourth through seventh.

By lap 9 Sheppard was already closing on the backmarkers, which allowed Weiss to quickly eliminate what was a nearly-two-second lead gap. Sheppard made a thrilling thread-the-needle move between Buddy Hanestad and Mark Rose on lap 12 to put those two a lap in arrears and regain a little of that lead margin, while Weiss needed another lap or so to get by the two slower cars.

On lap 18, just as Sheppard was regaining his rhythm and drawing away from Weiss and the rest of the field, a light rain that had been threatening all evening long finally began to fall, halting the festivities. The sprinkles let up within a few short minutes and the field was realigned quickly for a restart, but as the green flag was dropped Lanigan’s car – running seventh at the time – snapped loose and charged through the infield grass inside of turns 1 and 2, with a suspension issue as the culprit. The number-two man in WoOLMS points stopped his car on the inside edge of the back stretch, drawing out the race’s second yellow flag.

A four-car pile-up at the back half of the field just as the green lights came on again stalled the proceedings once more, and then the precipitation began again. However, the rain was light enough that track prep crews quickly brought out trucks to run in the track, and after just 32 minutes the field was set to take the green flag again, in the hope of getting through lap 25 in order to make the race official.

The weather held off and the final 32 laps clicked off without further delay. Sheppard ran away again, while Weiss battled with Clanton for four laps before finally surrendering second on lap 23.

By lap 27 Sheppard was dealing with backmarkers again, which allowed Clanton to draw near. The race leader expertly sliced through, but Clanton patiently clawed his way to Sheppard’s back bumper until he was within two-thirds of a second with just 12 laps left.

With eight laps remaining Clanton got as close as he could – less than a car-length – but Sheppard ran the final laps mostly stress-free for his Series-leading 12th win of the season on the tour, adding to a campaign bound for the WoOLMS record books. Weiss and Mars swapped third place on several occasions over the remaining 15 laps before Weiss settled things for good on lap 47, and Cade Dillard rounded out the top five.

Sheppard thanked his car owners, crew and sponsors from Victory Lane after the landmark win, stating, “This car is a lot of fun to drive … this is a team effort.” He also made a point to thank the fans on hand as well as the track prep crew for hustling out to pack the track in after the rain.

The event was the 660th feature held in the history of the World of Outlaws Late Model Series, with the ABC Raceway representing the 194th different racing facility that has hosted a WoOLMS event, dating back to the Series’ inaugural season of 1978.

Earlier in the evening the WoOLMS drivers took to the track for two-car timed qualifying. Mars, a six-time Red Clay Classic champion at ABC, set a new track record for stock-bodied racers with a single-lap time of 14.398 seconds (93.828 mph) – nearly 1.1 seconds quicker and over six-and-a-half miles per hour faster than Nick Anvelink’s previous track record (15.480 secs; 87.209 mph) set during the WISSOTA Late Model feature at the Red Clay Classic in October 2016.

In fact, 18 of the 24 WoOLMS drivers who made qualifying runs posted lap times better than Anvelink’s mark.

Clinton Day posted a $200 bonus for the fastest timed lap in the WoOLMS feature, which was awarded to Sheppard. In addition, Luger Trucking of Oxford posted long-haul bonuses to Blake Spencer (WoOLMS), who towed over 1,500 miles from his home in Florida to compete at ABC, as well as to Travis Budisalovich (WISSOTA) and Anvelink (Dirt King Series).

Twenty-two WISSOTA Midwest Modifieds and 20 Super Stocks were on hand to add to the program for the huge crowd on hand on this sweltering mid-Summer night, but only the Mid-Mods were able to officially record a completed feature, as once again the rains came and spoiled the fun. Outlaw Wraps & Apparel of Ashland provided a boost to the Mid-Mod purse on this night, with the winner taking home $500.

George Dalbeck started alongside visiting Brandon Jensen on the front row of the Midwest Mod feature, which was scheduled for 20 laps, and the 2011 track and Red Clay Classic champion from Wakefield, MI, shot away to an over-two-second advantage on the field within a mere four laps. Calvin Iverson followed in Dalbeck’s tire tracks to get around Jensen for second, with Jimmy Latvala close behind during the race’s early stages.

Karl Kolek’s spin brought the field back to Dalbeck’s rear bumper on lap 4, but he ran away again to a big lead after the restart, while Latvala looked stout in taking second away from Iverson. Jensen made up for his earlier loss of ground by overtaking Iverson a couple of laps later, and he improved on that standing when he took advantage of the next restart.

That came as a result of David Simpson’s stalled ride in turn 2 on lap 7. On that re-do, Jensen slipped by Latvala to take second, with Shane Halopka in tow for third. At this point, 12th-starting Brandon Copp began a strong trek toward the front, getting by Latvala for fourth on lap 9 and Halopka for third on lap 10.

Dalbeck did not pull away to a big advantage on Jensen as he had done earlier in the run, and after a lap 14 restart for Ross Fuhrman’s looped ride his lead was no more than a car-length, but when the rains returned track officials called the race complete, giving Dalbeck his fourth win of the season at ABC and 20th of his career. Jensen, Copp, Latvala and Halopka filled out the top five in close formation.

Dalbeck also set the fastest lap of the race at 17.217 seconds (78.411 mph). Copp’s late drive through the field earned him a “hard charger” bonus, courtesy of Anderson Pure Maple Syrup.

A stellar field of Super Stocks attempted to start its 20-lap main event, but Mother Nature’s final outburst was the strongest of the night, forcing the cancellation of the remainder of the show and a postponement of that division’s feature until a future date, which will be announced soon.

The ABC Raceway will get back into its traditional Saturday night routine on July 13, with the popular kids’ bike races to be presented by Chicago Iron & Supply of Ashland. In addition, the Raceway will host its first-ever “Stinger” special for the WISSOTA Hornets, offering an enhanced purse with a $300 winner’s check for that night’s feature.

Hot laps will start at 6:15, and the first green flag of the night is set to fly at 7 pm. “Race Night” will air on WBSZ, 93.3 FM, from 4:30 until 6 pm with track news and weather information leading up to the race program.