After this past Saturday’s program, the score now reads Balog 5, Mother Nature 2.

The North Pole, AK, native, who now calls Hartland, WI, home, scored a thrilling win in the headline event of a six-division program presented by the NAPA Auto Parts stores of Ashland and Washburn in front of a large crowd on a muggy, breezy night at the three-eighths-mile northern Wisconsin red-clay oval. 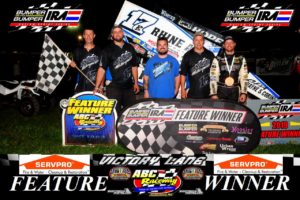 Scott Thiel, who holds the Raceway’s record for the fastest single-lap time and speed ever recorded here (12.382 seconds, 109.109 mph), set the fastest lap on this night’s qualifying with a 12.611-second tour (107.049 mph). Of the 18 IRA entries, ten posted qualifying lap times which equated to average speeds of 100 mph or more on the sticky, tricky red-clay oval.

By virtue of a blind draw, and with the assistance of a young fan in the stands, Thiel started the 30-lap A-main on the outside of the front row and immediately established a lightning-fast pace, pulling out to a straightaway-length advantage on polestarter Steve Meyer. Jeremy Schultz and Joey Moughan stayed as tight as they could to Meyer’s push bar, with Jordan Goldesberry pestering Moughan for fourth.

Balog, who started on the outside of row 4, quickly made inroads to the front, getting by Goldesberry for fifth on lap 2 and then around Moughan for fourth on lap 7. By that time Thiel had already begun picking his way through slower traffic while maintaining a sizable advantage on Meyer.

On lap 9 Nick Matusewski’s car rolled in turn 2 to bring about the first of a series of yellow-flag slowdowns, limiting the green-flag runs to three or four laps at a time at best. Thiel got away again on the restart, but within a couple of laps Bill Wirth’s car crept to a stop at the top of turn 3 to slow the pace again.

Balog used a classic sprint car “slide-job” to cut across the nose of Schultz’s car on lap 12 to take third place, just one lap before Ben Schmidt’s wild tumble down the front straightaway brought about another break in the action. Balog tried the same tactic on Meyer on the ensuing restart, but Meyer answered back to hold the spot, allowing Thiel to rebuild his advantage over a couple more laps before Russel Borland’s spin on lap 17 brought stalled the show again.

On that restart Balog’s slide worked to displace Meyer for second in turns 1 and 2, but on the other end of the track the pair made contact as Meyer fought back, causing Meyer’s racer to back into the turn 3 wall hard and ending his night.

Thiel pulled away again on the next restart, and over the next seven laps he held a comfortable lead. But once he reached the back of the field, Balog closed quickly. The series’ points leader made one desperate attempt with five laps to go to steal the lead away, but he nearly put himself into the turn 2 wall. However, Balog recovered and closed the gap again, and on lap 27 he threw his sprinter under Thiel’s and into thick slower traffic and took the lead. Thiel tried to drive back under Balog in turn 2, but he spun himself out of contention, leaving Balog a wide-open green-white-checkered run to the finish.

“I was pushing pretty hard,” Balog said of his charge through the field, especially regarding his pass of Meyer for second. “But I had a good car. These things (sprint cars) are so finicky; they gotta be right.”

Schultz stayed in the top five throughout the run to score a second-place paycheck, while Goldesberry also stuck close to the front to take third. Scotty Nietzel and Scott Biertzer battled back-and-forth during the entire run, and by virtue of the attrition they landed fourth and fifth, respectively. 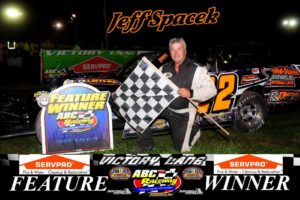 While the sprints saw six yellow flags in 30 laps, the other five divisions ran a combined total of 80 feature laps with a single caution flag thrown. That lone stoppage came one lap into the Modified 20-lap headliner, when thick traffic combined with a fast racetrack produced a scramble for positions on the front straightaway, a lot of contact and a three-car pile-up in turn 1. Polestarter Todd Gehl then led the field back to green but did not stay there long, as Steve Lavasseur worked his way around Bill Byholm and Gehl into the top spot.

Spacek, who started outside on row 4, want low to displace Gehl for second on lap 3, then repeated the move on Lavasseur one circuit later to take the lead for good. By lap 7 the six-time track champion from Phillips had a 1.4-second lead on another six-time champ, Al Uotinen, who got by Lavasseur on the previous go-around.

Even as he worked his way through backmarkers Spacek extended his advantage, eventually crossing the under the checkers a full 3.5 seconds ahead of Uotinen. Lavasseur and Steve Stuart put on a great side-by-side race for third, which was eventually won by Stuart, and Bill Byholm held a solid fifth throughout most of the run. 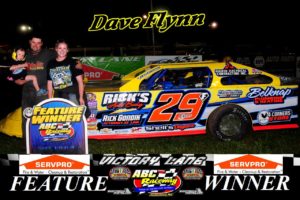 The Super Stock feature was a true thriller, with Flynn and Greg Kuklinski racing right to the wire for the win. Kuklinski engaged with polestarter Andrew Mackey and Cory Casari in a three-wide battle right at the drop of the green, with Kuklinski eventually claiming the lead. It took Casari another three laps before he could work his way past Mackey for second, but he struggled to trim into Kuklinski’s two-car-length advantage.

Flynn, who like Spacek started outside on row 4, used the low line of the track to slip through the field on his way to third place, and on lap 8 he was threatening Casari for second. Casari, meanwhile, made a number of moves to challenge Kuklinski, but the Raceway’s all-time feature wins leader held a strong middle-groove line and refused to give the lead away. With seven laps to go Flynn dove low to get by Casari, and from there the visitor from Superior chipped away at the Ironwood, MI, veteran’s stronghold.

With Casari and 12th-starting Nick Oreskovich closing in on the final lap, Flynn made one last dive to the bottom through turn 4, and he edged Kuklinski at the finish line by .107 seconds – about six feet. Oreskovich just nipped Casari for third, and Mackey completed a very impressive night with a fifth-place performance. 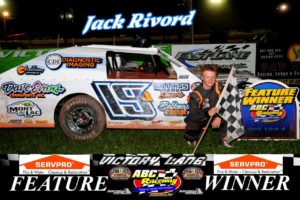 Jack Rivord’s run in the Midwest Mod 20-lapper was a no-doubter – after an early tussle with Gunner Peterson and Marcus Dunbar, the sophomore driver from Superior led every lap for his first-ever feature win. Rivord overcame the early battle and built a stout early advantage, while Peterson held off threats from Dunbar, Clay Passuello and George Dalbeck. Before the mid-point of the race Rivord’s lead was over 1.8 seconds, and by lap 12 he was slicing his way through the slower part of the field. 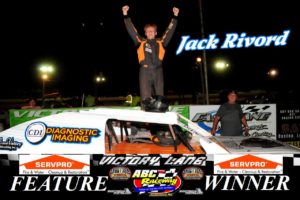 Peterson diced with Dalbeck all he could before finally giving up second to the divisional points leader. Dalbeck then went on a mission, cutting nearly a full second off of Rivord’s advantage while slicing his way through lapped traffic. But Rivord ran a smooth line and still had a lead of .978 seconds at the final stripe. Peterson, Dunbar and Passuello completed a close-knit top five. 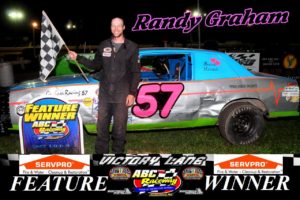 Graham, who has split six of the seven Pure Stock features run at ABC so far this summer with Justin Weinberger, battled with Weinberger again on Saturday before claiming his fourth win of the season in the class.

A bump at the start of the 10-lap feature between front-row starters Jessie Mudgett and Brandle Pupp opened the top lane of the track for Weinberger to get by and claim the initial lead, and Graham followed suit into second. From there the lead pair ran away from the rest of the pack, running mostly side-by-side, with Weinberger up high and Graham down low, for several laps.

It wasn’t until lap 8 that Graham found the traction he needed to get completely by Weinberger, clearing for the lead as the pair took the white flag. Graham held on for his 25th career feature win at Ashland and his eighth of the year (including four in the ABC Six-Cylinders), less than a car-length ahead of Weinberger. Pupp finished a distant third, ahead of Mudgett and Jeff Christman. 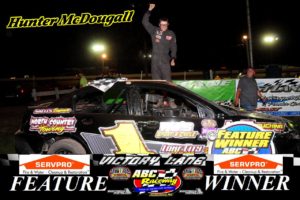 The Hornets raced for fun and money – not points – on this night, as they were not originally on the docket for this show. McDougall, the Duluth, MN, youngster who last won on opening night, made a three-wide pass for the lead stick on lap 2 and pulled away for the win.

By the mid-point of the 10-lap main event McDougall had built up a ten-length lead, while Derek Dunbar, Paul George and Dayna Marken tussled in close proximity throughout the run, eventually finishing second through fourth, respectively, behind McDougall. Polestarter Shawn Young, whose car dropped from the run with a couple of laps to go, was credited with fifth.

The Midwest Mods will be in the spotlight on Saturday, August 3, when the ABC Raceway presents its 13th annual “Mid-Mod Madness” special, to be presented by the Safari Tavern and the Lake Shore Cafe, both of Ashland. The WISSOTA Modifieds, Super Stocks, Pure Stocks and Hornets, plus the ABC Six-Cylinders, will also be on the program, with the Super Stocks completing their rain-delayed feature race from July 9 as well as running their full show.