In a program presented by Chicago Iron & Supplies of Ashland, Sabraski collected his third feature win in the first four races of the FastLane Motorsports Northland Super Stock Series by over half a lap, shortly after a win by over three seconds in the WISSOTA Modified A-main. It was the second time in the past two seasons that Sabraski won both features in Ashland on the same night.

Eighty total entries took to the northern Wisconsin red-clay oval on a hot, muggy night during which thunderstorms surrounded the Chequamegon Bay area but never threatened the completion of the program. 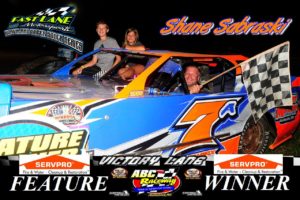 By lap 10 Sabraski had already caught backmarkers, but he skillfully threaded his way through the slower traffic to continue to build on his margin. By the time Oreskovich began picking his way through the back of the pack at mid-race, the leader was over four seconds in front. The tail-end traffic also cost Oreskovich his runner-up position, as Lawrence squeezed by for that spot on lap 20. 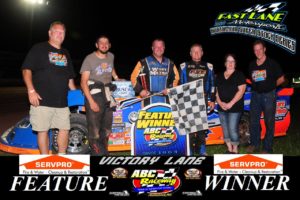 Every entry in the 25-car field finished the event, which took only 11 minutes to complete. Sabraski’s final margin of 9.8 seconds was better than a half-lap ahead of Lawrence, with Oreskovich just behind in third. Cory Casari closed to within a car-length of Oreskovich in fourth, and Dave Flynn came home fifth to maintain a scant two-point lead in the track standings.

Sabraski, whose win total for the year in the Supers reached 14 with the victory at Ashland, can secure the 2020 FastLane Series title with not much more than a start in the Series finale feature, to be held August 1 in Oglivie, MN.

Just before his performance in the Super Stock feature, Sabraski worked his way through the field to win the Modified 20-lapper, which was also caution-free. In this race, though, he needed to work a little harder, after starting from the eighth spot on the 16-car grid. 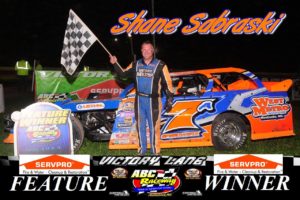 Front-row starters Rick Rivord and Jake Hiatt edged each other for the lead over the first couple of circuits before Hiatt gained the upper hand. As Hiatt drew away to a three-quarter-second lead, Rivord fended off challenges from Al Uotinen, while Sabraski ran just outside of the top five, patiently waiting for an opportunity to move forward.

That opportunity came on lap 7, when Sabraski found room at the outer edge of the track’s wide racing groove. With no other racers venturing up there, Sabraski swept around visiting Cory Mahder for fifth, Pat Cook for fourth, and Uotinen for third by duplicating the same outside pass coming off of turn 4 over a four-lap span. On lap 12 he repeated the move to get by Rivord for second, then eliminated Hiatt’s lead over the next two tours before taking the lead away with the same type of pass.

Sabraski had a 3.3-second cushion on Hiatt when the checkers waived, while Brandon Copp followed the winner’s high line around the field to take third late in the run. Uotinen recovered for fourth-place money ahead of points leader Cole Spacek.

There were some interesting surprises in several of the features on this night, not the least of which was Duane Dunbar’s flag-to-flag win in the WISSOTA Midwest Modifieds. Dunbar, the father of divisional points leader Marcus and a former three-time ABC Super Stock champ from Marenisco, MI, started outside on the front row and survived several restarts for his 22nd career feature win in Ashland but first since June 2017. 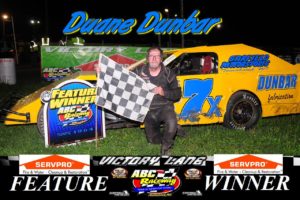 In only his second night out this season, Dunbar outran polestarter Tanner Hicks for the early advantage. Hicks supplied pressure for the lead but bumped an infield marker tire from turn 2 onto the track on lap 2, the penalty for which was a restart at the back of the field. After a Chris Bretting spin, Dunbar pulled away from Jimmy Latvala, who in turn had some distance on the battle for third between rookie Brady Uotinen and Ross Fuhrman.

A Diamond Bressette spin on lap 7 slowed the pace for a bit, but the field rattled off eight more laps under green before rookie John Darwin’s spin sent him to the pits. Justin Weinberger, who was running fourth, looped his ride on the restart, and visiting Zach Slayton spun in the first turn after the next green flag dropped. But over the final five laps Dunbar outran Latvala to a 1.1-second margin of victory, with Uotinen, an impressive Dalton Mains and Fuhrman completing the top five. 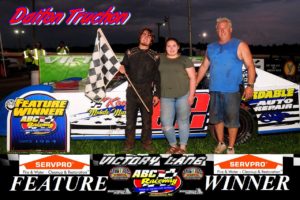 Another eye-opener was supplied by Ashland’s Dalton Truchon, who kicked off the evening’s feature action with his first career win in the ABC Six-Cylinder main. Truchon, in his fourth season, started on the outside of the front row, beat Mathew Rohlfing to the first corner, and held on through three well-spaced caution slowdowns for his landmark win.

From the start it looked as though Truchon and Josh Saunders were going to run off to decide the win between them, as they separated themselves from Forrest Schultz. The battle between Rohlfing and Dennis Groom for fourth was won by Groom just before Saunders’ motor gave out on him on lap 2, bringing about the first of the yellow flags.

After lap 3 was scored Jordan Pearce and Dominic Hmielewski got together to stop the action again, and Truchon had Groom and Schultz directly behind him for the restart. Dale Coddington charged past Schultz for third within the next lap, and Truchon held tight to his lead before rookie Trenton Bond’s spin with five laps left slowed the pace for the final time.

Coddington’s car slowed a lap after the restart and he dropped out of the event, and Schultz took advantage to move up to challenge Groom, with Pearce in tow. But this allowed Truchon the breathing room he needed to pull away over the final three laps to a one-second advantage at the checkers. Groom, the Raceway’s 2001 WISSOTA Street Stock champion who last raced in 2009, took second back from Schultz on the white-flag lap, and Pearce followed in fourth ahead of Rohlfing. 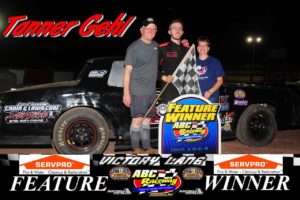 It won’t matter to Tanner Gehl that there were only four WISSOTA Pure Stocks in the field on this night, or that Jared Akervik’s car broke on lap 4 after he had challenged Gehl for the early lead. History will show that the second-generation rookie driver from Solon Springs won his first career feature by a big margin.

The 12-lapper went non-stop, and Gehl, too, started outside on the front row and grabbed the lead right away, beating RJ Holly to the first corner. Akervik, who had won the night before in Superior, quickly got to Gehl’s back bumper and followed the rookie closely over the first couple of laps.

Holly, while running third, spun his car on lap 3 but straightened it out soon enough in order to keep the race under green, falling to fourth. But at the same time Akervik’s car began to act up, and on lap 4 he coasted to the pits, leaving Gehl with a straightaway margin on Jeff Vendela, driving brother James’ car for the first time.

Gehl maintained the big advantage on Vendela for his first-ever win, with Holly scored a distant third. 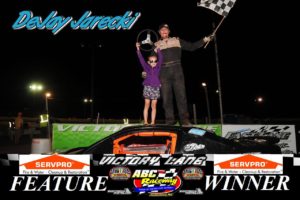 The WISSOTA Hornets capped off the night with a non-stop ten-lap feature, in which DeJay Jarecki held off a determined AJ House for his third win of the season.

House, the division’s points leader who started last on the five-car grid, was called for a jump on the initial start. The penalty didn’t hurt him for the restart, though, and he collaborated with Jarecki on a three-wide pass of leader Mitch Kieber on lap 2.

Throughout the rest of the run House dove low on Jarecki and threw his car hard into the corners, but he couldn’t overtake the Ashland driver, who had three car-lengths on House at the checkers. Josh Rowe quietly went about his business to nail down a solid third-place finish, and Jake Wammer overtook Kieber’s ailing ride on the final lap for fourth.

On Saturday, August 1, the ABC Raceway will welcome the Interstate Racing Association’s “outlaw” winged sprint cars as part of a program to be presented by the Heartland Communications Group of radio stations and the Ashland-Bayfield County Sportsmen’s Club. The IRA 410 sprints are capable of lap speeds of over 100 mph on the sticky red-clay oval, and they will be part of a program that will include the Modifieds, Midwest Mods and Hornets.

The pit gates will open at 4:30 pm and the grandstands will be open at 5, with hot laps set for 6:15 followed by sprint-car qualifying; the first heat races of the night should get the green flag by 7 pm. Grandstand admission tickets are just $18 for adults, and $5 for kids’ ages 5-12. Tickets are available either at the gate on race night or online via www.myracepass.com.

“Race Night” will air on WBSZ, 93.3 FM, as well as online at www.wbszfm.com, from 4:30 until 6 pm with the latest news and weather information from the track.