With the addition of the annual appearance by the Northern Vintage Stockcar Racers, ninety-six entries filled the pits and provided a full night of racing presented by the Ashland-Bayfield County Sportsmen’s Club.

According to Vernon’s Victory Lane interview post-feature, Ovaska had planned to run the car for the “Sizzler,” but his plans changed and Vernon was offered the opportunity. Vernon, who had finished third in points in the Sixes back in 2017 (he won the track’s Midwest Mod title that year as well), started the 15-lap headliner outside on row 2 behind defending division champ Tiffany Hudack and followed her past polestarter Jake Nevala into second place at the drop of the green. 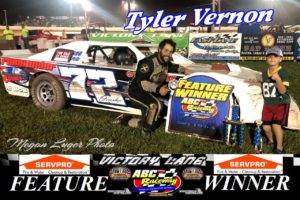 Well back of the lead pair, seventh-starting Randy Graham hustled his way through heavy traffic to move into third by lap 5. The field was bunched together after Josh Sanders’ slowed ride brought about the race’s only caution flag on lap 7, and when the race went back to green Vernon accomplished what very few racers have been able to do over the past few seasons – used an outside move to get around Hudack and take the lead.

Over the next few laps Graham and Coddington eventually followed suit into second and third, and with two laps remaining Graham was challenging Vernon with another possible outside-line pass, but Devin Dalbec’s stalled ride forced a green-white-checkered sprint to the finish. Graham stayed close but could not pose another threat, as Vernon won his first Six-Cylinder feature at ABC since June 2013 by a mere .342 seconds. Coddington held off last-lap charges by Hudack and a strong Dalton Truchon for third.

With two points-paying programs remaining in the 2019 season, Graham strengthened his advantage on Forrest Schultz in the championship standings to 79 points. 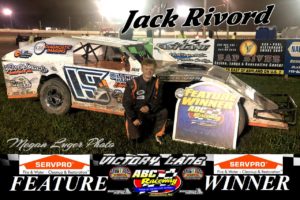 The WISSOTA Midwest Modified A-main featured two of the region’s up-and-coming stars in an outstanding duel to the finish. Justin Weinberger started on the pole and led Duane Dunbar and Jack Rivord early, while Gunner Peterson’s loose ride had drivers diving and dodging through the first two turns. Brandon Copp had just moved by Wayne Jacques for fourth before Peterson’s get-together with divisional points leader George Dalbeck brought out the first caution stoppage of the run on lap 2.

Dalton Mains spun and collected a couple of his fellow competitors less than one lap into the restart, but after the subsequent re-do Rivord moved inside on the veteran Dunbar to take over second on lap 5. The third-generation racer Weinberger and sophomore second-gen driver Rivord then proceeded to put on a show for all in attendance, with Weinberger holding to a solid higher line while Rivord stuck firmly to a lower lane over nearly the entire balance of the 20-lap run.             The shootout was interrupted only once, by Billy Milne’s spin on lap 9, but it resumed right away after the restart, with the tenth-starting Vernon slipping past Dunbar and Brandon Copp into third as the green light came back on. Rivord was the leader for that restart, but a minor bobble on lap 11 allowed Weinberger to get a nose out front for the next few laps.

Rivord was finally able to edge ahead again with two to go, and at the final stripe the youngster from Superior clipped Weinberger by less than two-tenths of a second for his second career feature win. Vernon trailed at a distance, ahead of Dalbeck and Copp. Dalbeck’s points lead grew slightly, to 29, over David Simpson after the run. 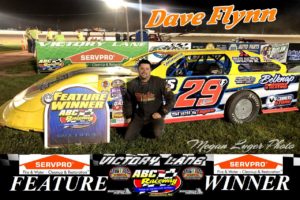 The start of the WISSOTA Super Stock feature was chaotic, but after two tries the 20-lapper ran off without another hitch and ended with Dave Flynn of Superior taking the checkers better than six seconds ahead of everyone else.

The initial start was negated when Greg Kuklinski was judged to have jumped from his second-row starting spot past the front-row pair of Aaron Mashlan and Scott Lawrence before the leaders took the green. On the second attempt Mashlan’s car was spun around going into the first turn, collecting Lawrence, Kuklinski and others and forcing a major reshuffling of the starting line-up.

Shawn McFadden Jr found himself alongside new polestarter Kyle Copp for the third try, and McFadden took advantage to set the early pace. Flynn slipped into second when Copp climbed too high into turn 4 on lap 5, and a couple of laps later Flynn drove low to get by McFadden for what resulted in the winning pass.

Flynn was uncatchable from that point on, building his lead from 1.4 seconds at the race’s halfway point to over four seconds – or approximately the length of a straightaway – over the next five laps, despite having to deal with slower traffic. On lap 13 Copp worked his way around McFadden for second, but Flynn was too far gone on his way to his second win here this season.

Lawrence recovered for a strong enough charge to challenge McFadden but settled for fourth, just ahead of division points leader Nick Oreskovich. Copp moved into second in the points standings with his second-consecutive runner-up finish, leap-frogging over Casari and Matt Deragon. 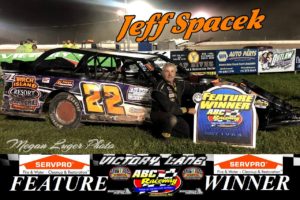 Kevin Eder looked to be well in control of the WISSOTA Modified A-feature over the first nine laps, but a caution flag and a restart changed all of that, and Jeff Spacek took over in a big way for a landmark win.

Eder drove around the top side of turns 1 and 2 on the initial start and pulled away from polestarter Paul Suzik for the early lead, with Al Uotinen following suit to second. Tyler Luger’s spin brought about the caution flag after lap 1 was logged, but Eder pulled away again and put some distance on the field.

Canadian visitor Cody Wolkowski, who restarted fifth, and Spacek, who was seventh, quickly gained third and fourth, respectively, on the restart by using the faster higher lane, and the two dueled for position well behind Eder and Uotinen. Spacek got by Wolkowski by diving low on lap 8, and then Luger’s second spin a lap later gave Spacek a golden opportunity.

On that restart Spacek dove low to slip past Uotinen going into turn 1, then slid across the nose of Eder’s car in classic “slide-job” fashion to take over the lead. From there the six-time ABC Raceway champ from Phillips showed how dominant a car he had, riding the rim of the three-eighths-mile red-clay oval to a 3.1-second final margin of victory and his 60th career win at ABC – the third-best total in track history. Eder, Wolkowski and Uotinen followed at a distance, while Steve Stuart edged Neil Balduc for fifth.

Spacek trimmed away better than half of his deficit to Stuart in the standings with the win as well, trailing now by just 14 with two shows left. 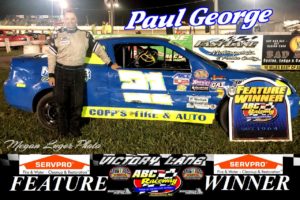 Tight-pack racing and frequent position-swapping has been the norm in the WISSOTA Hornets all season long, and the racing on this night was no exception, but a judgment call on a late-race restart cost one driver his first career feature win here and handed the victory to another.

Front-row starters Tyler Kachinske and Nate Rose were joined by Jason Ronning for some three-wide action early before Rose edged to the initial lead. But that was short-lived as Kachinske battled back and was deemed the leader when the caution came out for Paul Ripley’s stalled ride with one lap in the books.

Kachinske pulled away over the next few laps as Rose headed up a close-knit group debating second. Hornets points leader Paul George slipped past Rose for the spot on lap 3, and on the next circuit Rose found himself spun around to bring about another yellow flag. George used the restart to his advantage by getting past Kachinske within another lap, while a recovered Ripley clawed his way past Rose for third on lap 7.

After Ronning’s stopped ride on lap 8 brought about the last yellow-flag stoppage of the night, Kachinske got too eager and jumped the restart to take the lead back from George, and he pulled away over the final four laps for what he thought was his first-ever win. Kachinske was penalized two spots in the final finishing order, giving George his second career win here, with Hunter McDougall scored in second. Rose and Ripley completed the top five.

George extended his lead over Derek Dunbar to 24 points in the Hornets standings. 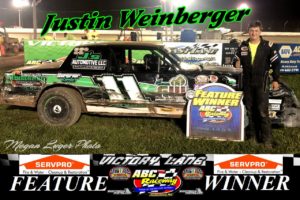 The WISSOTA Pure Stocks ran off their ten-lap A-feature without a caution, and a stumble at the start by polestarter Brandle Pupp allowed Weinberger and Graham to get by into first and second. From there Weinberger made sure there would be no one to challenge for this feature win, pulling away to a full-second lead within just four laps.

Jared Akervik, on a hot streak at area tracks in recent weeks, clawed his way into third on lap 3 and tracked down Graham, and that battle for second allowed Weinberger to build on his advantage. By the time he took the checkers the youngster from Park Falls was nearly three full seconds up on Graham, who held off several stout threats by Akervik. Pupp came back to claim fourth just ahead of James Vendela.

Weinberger has closed to within 12 points of Graham in the Pure Stock championships standings. 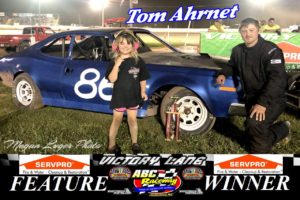 The traveling Northern Vintage Stockcar Racers group ran heats and feature races for each of their two different divisions. In the “full-bodied” stock car feature, first-year driver Tom Ahrnet of Hawley, MN, drove his AMC Hornet around the top line of the red-clay oval in much the same manner as Spacek did in the Modified feature for his first-ever win with the club, by a large margin over Paul Dolphy. 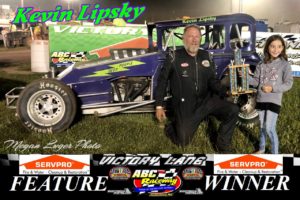 In the open-wheeled “super-modified” main, New Richmond’s Kevin Lipsky held off a late charge from Butch Bethke in a battle of NVSR veterans for his first win at ABC.

The next-to-last night of the 2019 regular race season at the ABC Raceway will be on Saturday, August 17, when the track will pay tribute to its fans with its annual “Summer Blast” appreciation night, to be presented by Northern Wisconsin Fence of Phillips and Outlaw Wraps & Apparel of Ashland. All six divisions will be in action, with the enhanced-purse feature recently announced for the WISSOTA Pure Stocks to be held on this night. 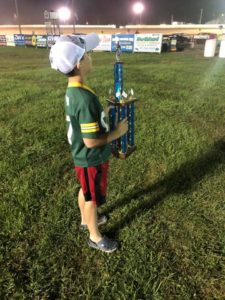 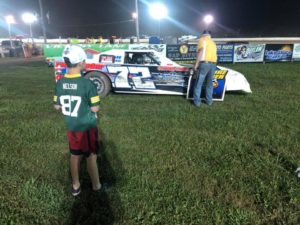 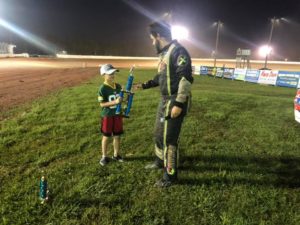 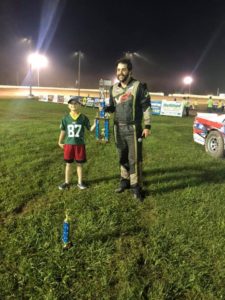 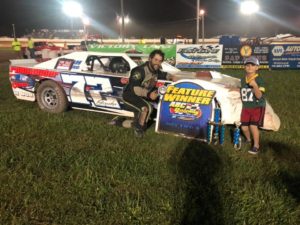 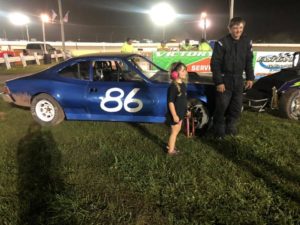 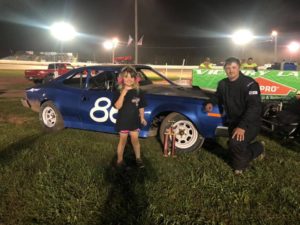 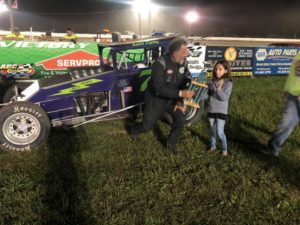 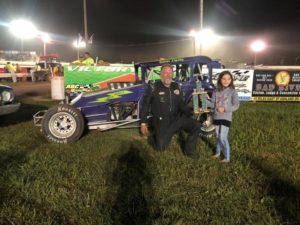 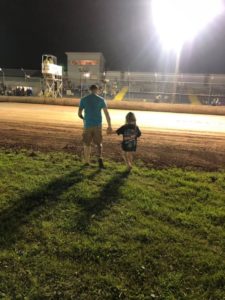 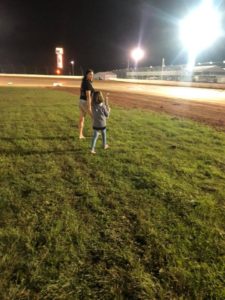 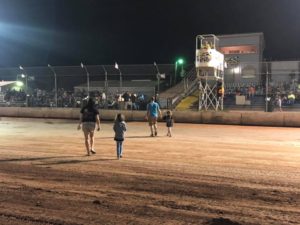