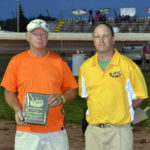 Dick Christman  this successful driver of the familiar #89 won his first feature at ABC in 1969, and he didn’t stop winning until 1982 – he won at least one feature here in each season but one during that entire 14-year span … among his wins were Red Clay Classic Super Stock titles in 1978 and ‘81, and he was a two-time track champion, in 1977 and ‘80 in Super Stocks … his 55 career feature wins here ranked as the fourth-highest total in track history at the time of his induction, and his 44 career feature wins in Super Stocks has been a track record for that division … he was also highly successful racing at tracks in Superior, Proctor and Hibbing 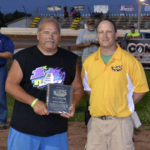 Steve Kieber  ever since his days racing Street Stocks here in the late 1970s, Steve was a fan favorite, drawing a fiercely loyal following from the Ironwood area … in a career that spanned more than four decades, he was a fixture on the ABC oval, chalking up 11 career feature wins in Street Stocks and Modifieds, with his cars sporting the familiar #76 … his father, the late “Chum” Kieber, was a former ABC Raceway track announcer who always said when introducing Steve onto the track, “That’s-a my boy!” 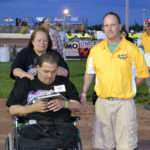 Don Koivisto  calling the ABC Raceway his Saturday night home for over 40 seasons as a racer and a car owner, Don was always involved – with his cars as well as in the racing organization here … the definition of a true sportsman, he earned a reputation for always being willing to help a fellow competitor … Don scored four feature wins as the popular driver of the #33 from 1985-’88, in both Street Stocks and Super Stocks, and once he decided to hang up his helmet, he put other drivers behind the wheel of his cars and continued to be successful until his passing in March 2017 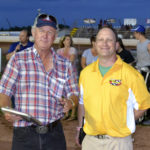 Jule Wilcox  the silver #12 Six-Cylinders that Jule wheeled at ABC set the standard for success in that division … he posted 49 career feature wins over a 16-year period – all in the Sixes – ranking him sixth on the all-time win list here at the time of his induction, and first overall – by a ways! – in that division … a four-time track champion, in 1986 and from 1991-’93, Jule won eight consecutive feature wins in ‘86, including two in one night … he finished his career with a brief stint in the Modifieds … he also contributed his time and efforts during the Raceway’s front straight wall replacement project in the late 1990s … while fast on the race track, he was always a true class act 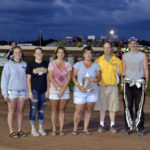 Chuck & Lucy Anderson and daughters  involved since the very beginning of the Association, Chuck and Lucy each donated over 25 years to the success of the track … Chuck started as a driver, then worked with Ron Hmielewski on his car during the early years before they both became involved with the organization as volunteers … both became long-time members of the Board of Directors, with Chuck serving as vice-president, chairman of the Board, and director of the Safety Committee … Lucy also served for many years as a Board member and also donated her time assisting with lap counting, concessions, ticket sales and helping to organize the annual awards banquet … their daughters Kris and Kerrie also became involved with the track, with Kris serving as secretary and treasurer and Kerrie helping in a variety of capacities … after Chuck’s passing in 1987 the Raceway held its prestigious “Chuck Anderson Race of Champions” night for 16 seasons in his honor, and the “Chuck Anderson Award” was presented for several years to the Raceway worker who contributed significantly to the success of the Association in a volunteer manner 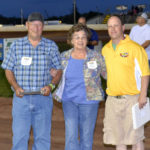 Bob & Geraldine Korpela  involved with the Association since its beginning, Bob spent many long hours in graders and pack trucks each week making sure the racing surface was as perfectly prepared as could be; he’d also contribute time and effort with his pulp truck to help with repairs to guard rails and fence posts … Geraldine – or “Cookie,” as she was affectionately known – took over for Verna Brevak in running the ticket gate, and she was always the first one at the track each race night, welcoming fans and making sure the money was counted out exactly right … both provided excellent examples of the track’s spirit of volunteerism for over 30 years 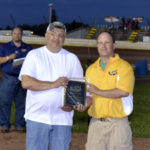 Walt & Diane Martens  Walt and Diane had been involved with the club since the late 1960s, when he was a successful racer here, and they continued contributing to the organization for many years after he hung up his helmet … Walt acted as a track judge and flag man and also served on the Board of Directors, while Diane worked in the tower as a lap counter, oftentimes running down to help in the concession stand during intermission … each had donated well over 40 years to the organization 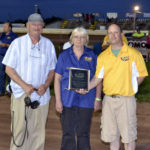 Mike & Linda Sorenson and family  after moving to the area in the early 1980s, Mike and Linda became eagerly involved in the Raceway … after becoming one of the first successful drivers in the early years of the Six-Cylinder class, Mike became an on-track official as well as a member of the Board of Directors, where he had served for many years until his resignation from the Board in 2015 … Linda was an unselfish contributor in a number of capacities, from being the first in the kitchen to help with food prep to counting laps in the tower … their kids continue to be very generous with their time at the track, with Nick and Steve helping in the concessions and safety areas and Wendy selling 50/50 tickets 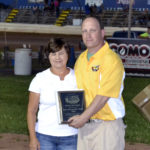 Jerry & Lorraine Zifko for many years, as drivers came through the pit gate, the first person to greet them was Lorraine – or “Babe,” as she is affectionately known; she was a great representative of the Raceway in that capacity and provided an excellent first impression of our track to racers … Jerry manned the back gate like an army general, making certain no one got in without paying, but he was also the best friend a person could have in the pits … both provided many years of making racers feel welcome and appreciated.